The Path of the Righteous through the Haze 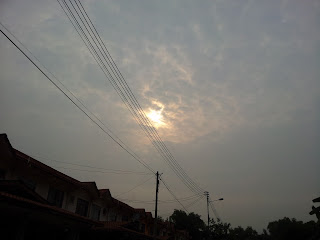 International The News reports: "Indonesia stepped up aerial operations on Monday to extinguish forest fires raging on Sumatra island as Malaysia remained smothered by smog and Singapore enjoyed sunny skies thanks to favourable winds." Just the night before I was due to return to Singapore (Saturday morning), the headline news were that Singapore's PSI reading has reached a record high of 401 late Friday afternoon. So I prayed to the Lord that the Lord would drive the haze away from Singapore and it would be clear when I reached the island-state. 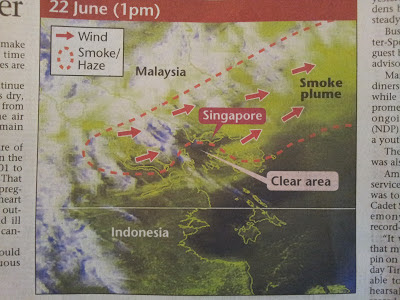 At 12:30pm Saturday the plane landed at Johor Bahru Senai Airport and it was very hazy still. By 2pm, as I was crossing the JB Causeway to Woodlands, Singapore, sunshine broke through, though the Singapore's sky was still cloudy and slightly hazy. By the time I reached my home at Upper Bukit Timah Road, I could see blue skies outside my windows. I turned on the news and it was reported that for the first time in three or four days, the PSI reading has dropped below 200, in fact it has dropped to 73 by 3pm. I could not help but rejoice that the Lord had answered my prayers as He has done in the past, even during the SARS crisis in March 2003 which never reached Sabah when I was pastor of a local church in Kota Kinabalu.