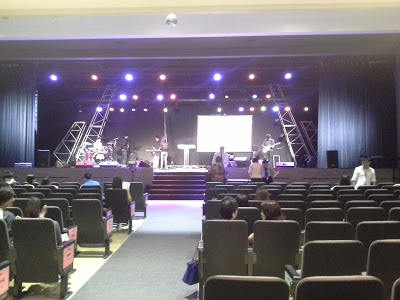 I started preaching the first Sunday of the year in Singapore and yesterday I concluded the first half of the year by preaching at Kuala Lumpur. I thank God for opening doors of ministry for me to speak His Word and to instruct many unto righteousness. The week-end in KL was full of unusual encounters. First, the headlines greeted me that Kuala Lumpur had clear blue skies and yesterday it was the same. There was no haze in sight. I was told that there was another session held concurrently with the Seminar and more people were supposed to attend the Post-13th General Election forum. But many more came to my Seminar by the grace of God. Sunday was eventful. I was led to a worship hall (the church has 7 levels with multiple worship halls) and I sat there for half an hour thinking that there was the service I was supposed to preach at. The youths sang a very beautiful worship song in Malay and I thought to myself, "Wow! This is an interesting Bahasa service with so many Chinese young people." But later a youth came to me and told me it was a Chinese prayer meeting and I quickly went to the place where I was slotted to preach. As my flight back to Singapore was 3pm, I kind of preached a shorter message (30 minutes) and I left the Hall when they were doing the collection and was taken to Subang airport. 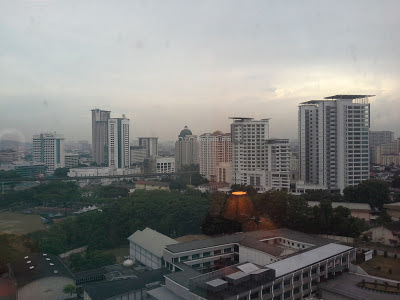 I had two unusual invitations in the past weeks. First, 5 minutes before the service started, the pastor of the church invited me to be the Church Camp speaker and I just nodded, thinking that it would be confirmed later. But he announced it in the pulpit and I guessed that's it then for me. Yesterday, just as I finished preaching, the Chairman of the church council walked me out of the door and in the elevator, he invited me to be their Church Camp speaker for next year.

I had turned down 2 Church Camps invitations this June because after a while I wondered whether my efforts were paying off. Some churches may take church camps as recreation and vacation rather than hearing the Word of God. But pity the poor speaker who prepares for a fortnight and preach his heart out 4 or 5 times, and none whatsoever benefits the Campers because their hearts are set out eating durians, going to the beach and shopping. It is not that we can't do fun things or enjoy durians but organizers of Church Camps must ensure that the spiritual aspects of the Camp - worship and hearing God's Word always take first place and per chance, God will work and move mightily to bless and transform lives.

So I prefer to conduct intensive seminars as I did in KL (3rd time in the last 13 months). At least those who come to these seminars really desire to learn the Word of God. They are prepared to sacrifice whole day Saturday to study one Book of the Bible, and that is commendable.

I won't be preaching again until mid-August because the next academic year has begun today with Orientation followed by the College Retreat this Thursday and lectures commence next Monday. July is always the busiest month and I will be teaching the Gospels and Acts for the 1st year students and Romans as an elective for 2nd and 3rd year students.