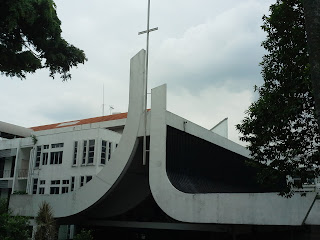 We have this wonderful tradition at TTC that the Principal would preach at the Opening communion service (the Friday before Lectures start) and the Academic Dean would preach in our first Wednesday chapel service where all the College community gathers together for worship. Today was no exception, though I felt strangely warmed in my heart as we sang "How great Thou Art".

I could not control my tears flowing down my cheeks as much as I tried, the first time that it happened to me during a Chapel service, now in my 6th year of teaching ministry. Further, I could not sleep for the past couple of nights, though I should have been dead tired working whole day and night getitng things ready for the new academic year.

The last time this happened to me was in early 2007. I was pretty fired up to make 2007 counts; I preached on the first Sunday service of the year then with the title, "Making your days count" based on Psalm 90. Little did I know that in less than 1 year I resigned from the pastorate without knowing where I was going. If circumstances dictated my staying or moving, I would not have moved from Sabah in 2008. In March 2007, I just moved into my new house and the church was growing and we started a 2nd service in late 2006 with the opening of a newly built Ministry Centre (Pusat Pelayanan as it was called in Malay). And the church took several months to persuade me to stay on as pastor but at the end I did not change my mind and I preached my farewell sermon in mid-Feb 2008. Coincidentally, I preached my first Sunday sermon in my home-church since I left as pastor exactly 5 years on, last February 2013.

I had this great excitement to commence lectures on NT 1 on the 4 Gospels and Acts over 14 weeks. Your Word, Lord is in my heart and like fire in my bones I cannot hold it in. I can't wait till tomorrow to meet some 36 new students this year. It could be my last lectures before the next move of God sweeps me away as He wills, "the wind blows where it wills, and you hear the sound/voice of it, but cannot tell where it comes from and where it goes. So is everyone who is born of the Spirit." (John 3:8).
at July 10, 2013