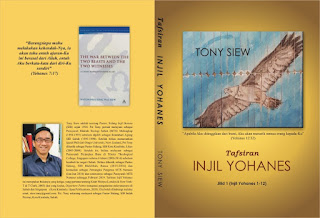 Would anyone now blame Boris Johnson for not delivering Brexit on 31st October 2019? In fact, it was a mark of his leadership that he insisted that it should not go beyond 31st October to get most things done by such date and at the end, the landslide Election on 12th December delivered Brexit which is now ratified by the European Parliament. As for me, I had planned for my 2nd book to be published by 2nd February which to me is one of the most beautiful dates, however one writes it, 02022020.
But it is not going to be and it is only going to be delayed for a fortnight. If I did not push hard for the 2nd February date, it might have dragged on until March or later but now within two months (19th December 2019, I took delivery of my Departure Points) and now by 19th February, by God's grace I will have my third book with me, Tafsiran Injil Yohanes. During the Lunar New Year I got someone to read it over 4 days and he wrote an overwhelmingly positive review of my book. Praise God!
at January 30, 2020