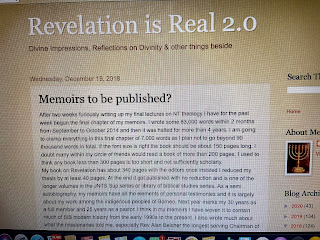 This morning I came across a blogpost accessed by a reader dated 19 December 2018. In it I spoke about my plan to publish my memoirs. Little did I think that exactly a year after that on 19th December 2019 my book, Departure Points was published (see here). In the blogspot I mentioned that I had reached 83,000 words and at the end, my book exceeded 93,000 words. With small margins, my publishers managed to squeeze that into a book of less than 200 pages. Front pages alone totalled about 14 pages with maps, lists of villages and towns visited, etc. I was thrilled that one of the church leaders who bought the book mentioned that when he read the first chapters, he compared that with Hudson Southwell's Uncharted Waters (Southwell's mission work in Borneo in the 1920s to 1950s).
Hudson Southwell was one of the three pioneer missionaries (1928) from Australia and he was a long serving Chairman of the mission board until Alan Belcher took over in the late 1940s. In my book I made it very clear the immense contributions of the first snd second generation missionaries and my field experience was insignificant compared to what they had experienced in the first decades of the mission in Borneo. Nonetheless, we cannot dwell in the past, for at least my experience brings into the present what the Church has undergone in recent past. Anyhow, my friend's encouragement was heartening as it was my intention that this younger generation of believers come into knowledge of the past, and in doing so understand the present state of the Church and mission as well as how we could repositioning ourselves in the future if we want to fulfil God's purposes for the State and the nation through His church in Sabah.
at May 29, 2020