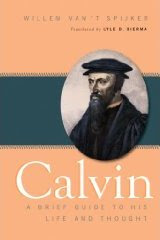 I am burying my head in books on Calvin. In the past couple of weeks, I had taken out about 10 books on Calvin from the library. For first-timers, I would recommend Spijker's Calvin: A brief guide to his life and thought (2009). It's only about 185 pages long and within 3 or 4 sittings I have almost finished reading it. One thing that caught my eye is as early as 1537 (aged 28) Calvin already called himself as "Professor of Holy Scripture in Geneva" (p. 34, Spijker). Interestingly, Calvin had never undergone formal theological training as had Luther. Luther earned a doctorate in theology and Luther was equally proud of his title as "Doctor of Scripture."I would not begrudge Calvin for calling himself as Professor as such tender age because by then he had published the first edition of Institutes which would become the summary of the theology for the Protestant movement in the 16th century and beyond.


And also Professor Calvin was a master of Latin and Greek literature both biblical and the classics and he managed to master Hebrew as well as is evidenced by his command of the language in his OT commentaries. Calvin's theological education was mainly self-taught with humanities and classics which he learned during his undergraduate years stood him in good stead. In his latter years, Calvin started the Geneva Academy (1559) to train ministers of the Gospel. The first three professors appointed were professors in Hebrew, Greek and the Arts respectively. Professor of Hebrew taught OT from the Bible in the morning followed by lessons on Hebrew grammar. Professor of Greek taught from Greek classics like Aristotle and Plato and the Greek New Testament. Professor of Arts taught philosophy, and Latin authors like Cicero and Cato while Calvin himself was the Professor of Theology teaching from both the OT and NT as Scripture, the Word of God and his magisterial Institutes which Calvin revised throughout his career as the chief Reformer in Geneva and also in Europe.
I would not begrudge Calvin for calling himself as Professor as such tender age because by then he had published the first edition of
at April 06, 2013