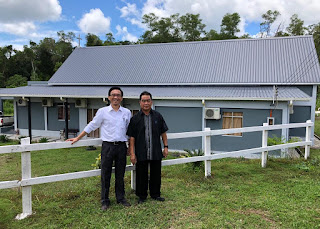 I have just completed the first leg of my tour of Sabah in the next few weeks before saying goodbye to Ranau for good. We drove for 4 hours to Kudat the northern most town in Sabah via the Marakparak road. We stopped over for tea break at Kota Marudu, a growing and thriving township and at 6.15pm we reached the church that hosted us for the weekend. Early Saturday morning after I shared a devotion with my homegroup we visited the Tip of Borneo Tanjung Simpang Mengayau about 10 kms from Kudat. It was overcast but we still felt the heat from the sun. We spent nearly 2 hours there before making our way to another beach Pantai Kelambu which is just as scenic as the island with green forest is shaped like a mosquito net hence the word Kelambu in Malay.
We returned to Kudat at 2pm and after dinner we conducted the worship rehearsal alongside the Youths of SIB Bandar Kudat church. The church is newly built two years ago and for the first time I felt chilled because the air con was functioning as expected. On Sunday I preached an hour long message on the Feast of Tabernacles as by evening it was 15th Tishri the beginning of the 7 day long autumn Festival in Israel. It was well received as on the way back to Namaus I received two texts from the pastor and also from the chairman that the message was timely and relevant. In fact the chairman said they would invite me again next year. Praise be to God. That was the first leg of my tour of Sabah with a break in Singapore next week and then a long drive to the South of Sabah to Kemabong for an eldership seminar. After that to the East, at Pekan Telupid for a 4 session revival meetings based on end time teachings. If things go well, I will preach at the College chapel for the last week of October and that's it. "It is done!" Sudah selesai. 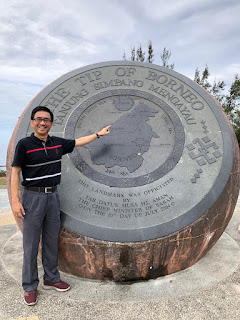