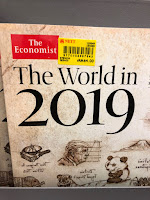 Daniel 7 is one of the most enigmatic chapters in the whole of the Bible. The fourth beast that rises from the sea has ten horns and then just before a little horn rises, it appears that there are three other horns and that these three horns needed to plucked out before the rise of the final horn that is going to persecute God's holy people in the end-time. With the rise of globalism, nations that stride the world stage are to be seen for what they are. As we approach 2020, it is clear the world has become tri-polar as if there are now three great powers in the world.
You can't see that even 10 years ago when USA is the undisputed sole superpower on earth. But in the past decade, the rise of China as an economic and military power has not escaped anyone. The recent arrest of the Huawei CFO is just of the many symptoms of the conflict between world powers competing for influence, politically and economically. With the one belt road initiative launched a couple of years ago to much fanfare, China's influence has only grown every year. The trade war and many other conflicts are bound to happen between nations especially among great powers as they jostle for advantage in trade and political clout.

Russia is the third main power on earth today. A decade ago, most people have written off Russia. With the plummeting oil price and rouble, and Western sanctions, Russia seems to be at the mercy of the West. But with political stability like China, Russia's President Putin in his fourth term as President has restored Russia's influence in the world. Russia's annexation of Crimea a couple of years ago was condemned but no one, not even Nato or USA dared to oppose Russia militarily on that front. Likewise in neighbouring Ukraine as well as Eastern Europe, Russia's influence has only grown. Russia's intervention in Syria just north of Israel shows the extent of Russia's military reach and with USA withdrawing its troops, an implicit admission of defeat, Russia now holds sway in Middle-Eastern affairs.

With America on an America-first and isolationist approach, Russia and China will in the next decade rival USA in every way. The United States of America are still the most powerful country in the world with its US$700 billion a year defence's spending, almost 10 times Russia's military budget but with technological advances in nuclear and cyber warfare, Russia and China are moving in front and in this new world, these scientific advances will be telling in the event of war. These three great powers are also nuclear-powered and with the instability and conflicts that come with jostling for supremacy and world dominion, one false step or (touch) could start the dreaded nuclear war. A third of the world may be affected as the book of Revelation predicts (under the 7 trumpets' series) and we may be seeing fulfilment of Scripture in the coming decades before the little horn arises out of it all.
at December 21, 2018