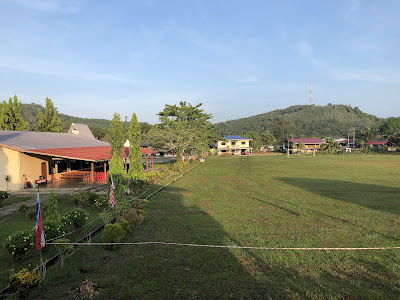 My friend told me that I earned another ascription to my job portfolio. He said I was no longer itinerant as I have been doing much travelling as of late. I remember a couple of my friends in Singapore who considered themselves itinerant preachers because they preached in local churches in Singapore and are not fixed in one church. I guess if that is the right definition of an itinerant, then I have gone beyond that. I thought in my long sabbatical I would rest more and stay put in Kota Kinabalu, perhaps reviving my writing projects. But then since June, my ministry had taken a turn into travelling. In the past two weekends, I have travelled more than 650kms on single lane roads from North to South. I had just been to a village where one can walk across to the State of Sarawak in less than half a day. The leaders told me that it was just across the hills, though the mountains look daunting to me. I drove for 4 hours to a village near Sipitang last Saturday, arrived there at 5.30pm with less than half an hour rest, preached a sermon of one hour at 9.30pm and went to sleep past midnight. Then I woke up several times because of the cold and new environment. It was fits and starts, perhaps less than 3 hours before I got up at 5am. Then I preached an hour long sermon at 10.30 to 11.30am and I did not look at my watch even once as I felt led by the Holy Ghost.
The church was almost filled with the left and right verandah packed with worshippers about 400 or 450 in all. There was an altar call at the end and about 30 people came up. I made specific calls. One for the message the night before as I was too tired to pray for others. It was on the book of Ecclesiastes about enjoying the fruits of our labour. I thought it was most apt for a men or seniors’ meetings where most men were above 50 years old. The next prayer item was for those called to be leaders, those ready to believe, to make sacrifices and to act upon God’s leading. I spoke about faith, sacrifice and action based on Hebrews 11 and the three leaders in Abraham, Moses and Jacob. I made the reference to Jacob’s staff and why he blessed Joseph’s sons leaning on his staff. Jacob left Bethel with his staff as his only possession, but he came back to Bethel after 20 years with two companies. So the second sermon tied in with the first that if we entrust ourselves to the Lord, He is able to bless us. It is important for my denomination to hear messages such as these, because most of us are in the lower sosio-economic strata of society. I shared many examples of how to believe in a God of abundance, and not bound by a scarcity mentality. My messages must have struck a cord in many hearts as the District Superintendent who bid me goodbye said that he was very much blessed and much enlightened (banyak terang baru).
at October 01, 2019