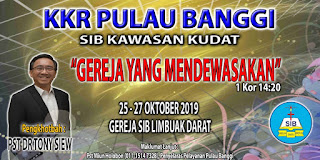 I lost track of time. I have been away for 4 days. I did not know that it was public holiday in Sabah today until I went out for lunch. Last night we got back home just after 8pm after driving from the Kudat Jetty at 3.30pm. We took a ferry at 2pm from Banggi Island concluding our 3-day expedition in the island. By the 2nd night on Saturday I did not know where to find strength to preach and preach I did and prayed for about 40 people who came forward - the sick, infirmed and the anxious and they were many among folks in Banggi Island. The people of the Island are mostly improvised and most of their children looked malnourished and the women folks looked thin and gaunt. Only a few teenagers showed the vitality of life and they presented a traditional Bongi dance on Friday night. I was supposed to preach three sessions but a team that was supposed to give a seminar on Saturday did not turn up and I was roped in to lead a 2-hour session on Q & A. Some of the Banggi folks have come to Christ 25 years ago and some more recently but most were still very much bound by their culture, customs and traditions. There was much fear in the unseen or spirit world, about the dead and poverty all round.
We had an expedition to visit the Island after the short seminar and the District Superintendent drove for 4 hours in the eastern part of the Island and we managed to visit three churches and went past another one. One church, the farthest was in bad shape. The wall have holes and the plywood and wood of the floor was uneven whether we stand or we sit. I led a prayer for restoration of God's house before moving to another small church. This time the church building was better looked after, as I see a young mother with a set of keys to the church and she and her family lived closest to the church building. But the pastor's house was in a sorry state. One pastor with our expedition tried to clean the room and he had to fend off bats (he killed one with a small carpet near the door). And one new pastor will be sent there next month. The first church we stopped by was in the process of completion. Incredibly a team of 4 men from Sipitang (the place I visited last month) had been coming to the Island for the past two years and now the church is about to be completed. The leader of the team told me that they drove last Thursday midnight from Sipitang arriving in Kudat before 6am and then bought materials in the shops before loading into the Ferry that sailed at 9am. I met them five times (can that be a coincidence?); both times on the Ferry, one time at the village where they were hard at work, at Sunday service and finally on our coffee stop in Kota Marudu, we bumped into them again. I was moved to pay for their tea-break and it was an honour to know these men who sacrificed much and travelled across the mainland and across seas just to build a church for the Bongi people in their village.
at October 28, 2019