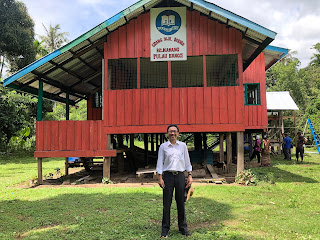 That’s a strange title for a book, but on second thought it might just sum up my life and ministry thus far. In the past two months I have been putting the finishing touches on my book and God willing, it will be ready by year’s end. I have never stayed in one place for too long. In fact, my Singapore’s sojourn was the longest of 6 years followed by my pastorate in KK for 5 years and 3 months. So I have majored in departing (Greek, exodus),  both literally and metaphorically. Departing from this life means death and in fact Christians are called to die, to bear the cross and not love our lives unto death. “Departure points” is Robert Alter’s translation of Numbers 33:2. “And Moses wrote down the departure points of the Israelites, their journeyings by the word of the Lord”.
I have journeyed from one place to another; departed to various locations and places; to various nations and tribes. Last week I was up north in the island of Banggi among the Bongi tribe and next week I shall be going to Nunuk Ragang, the presumed birth-place of the Kadazan-Dusun tribe, the majority tribe in Sabah. After that, a series of Christmas preaching in three places, two of which are far into the interior, Trus Madi and then Tenom. I am still starting and departing. We live only once and once this life is over we depart to the other side, which only those who have done the will of God will find its true resting place and live forever, never again to depart from God’s presence.
at November 01, 2019