Rest in the Eye of a Storm 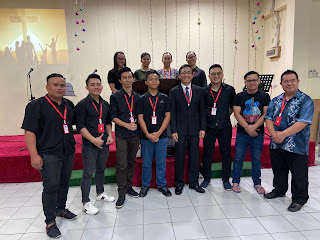 A few of my friends in Malaysia and Singapore were beginning to wonder why I was going to Singapore, as if going into the eye of the storm. I fear not as the Lord promises to be with me when I am on mission (Matt 28:19-20). But above all, I am going to Singapore for a rest, though I may be preaching at a couple of places there as well. Yesterday, I preached twice in consecutive weeks. The former pastor refused to preach in two consecutive services and I can fully understand why. I only had a bun between services and sat in a sofa for about 10 minutes before getting back to the 2nd service which had already started. Most church members only see their pastor during Sunday and I have to make myself available to them despite preaching twice.
Thankfully, I limit my first sermon to 35 minutes as we have to stop by 10.10am to give room to the second service which starts on 10.30am. During the 2nd service, despite much lower energy level, I preached longer for about 45 minutes until 12.15pm. Yesterday was also the launch of my first commentary published in Bahasa Malaysia. It was a historic moment. No Malay commentary has ever been published in about 100-year history of the Malaysian church to the best of my knowledge. We have a few Indonesian commentaries but Indonesian language is not the same as Malay used in Malaysia. Suddenly in early 2020, I have published two books. In the church yesterday, 20 copies of the John's Gospel commentary were snapped up and also 5 copies of my "Departure Points".
at February 17, 2020