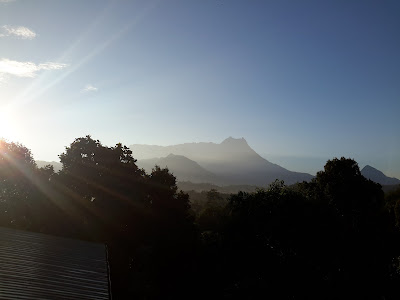 I give thanks to You Lord for You have enabled me to preach Your Word and the tribes of Your inheritance have returned unto You in faith and truth.  After three consecutive days on the road I am glad for a breather before commencing the final leg of this Christmas itinerant preaching season that has brought me into the far corners of Sabah. Last Friday I went into village which I thought was a short distance from the main road but it took me nearly 30 minutes detour and when I reached the place I found myself almost at the foot of Mount Kinabalu only that it was from the Kota Belud side and not Ranau/Kundasang. The village is small but the church building is big that can seat 300 or 400 people. At most I think the weekly attendance is 100 people and I wonder why some places build large buildings, but two third empty on most Sundays. As it was midnight as we ended our service,  the District Superintendent went with me in the car and guided me to another village closer to Kota Belud where I spent the night. Otherwise I would not be able to navigate the village roads on my own in pitch darkness. I returned to KK at day break but returned with my wife to the same township in the evening and preached in another but bigger village church.
This time we had to use the Sunday school building as the old church had been demolished and the village is in the process of building a new building. Again I saw a massive structure and probably could seat close to 1,000 people. I told the church that they better think of ways of utilising it for Conferences, Bible Camps and Seminars, and be active in evangelism to fill the seats on any given Sunday. I preached two sermons one on Saturday night and also yesterday's Sunday service. I felt the Lord enabling me to preach His Word, one from Isaiah 48 and the other from Psalm 127. In my sermon yesterday I emphasised on raising sons in the fear of the Lord since almost everywhere I go female attendance outnumbers males 2 to 1. Praise God that during the worship the team was mostly males including the song leader. And then 5 boys and 4 girls we prayed for at the end of the service as they headed to be baptised. I was given the honour of baptising them but as there was considerable delay after lunch,  I asked leave and the church pastor had to conduct the baptisms in late afternoon. I was comforted by the verse that Paul said I was called to preach the Gospel and not baptise and on occasions I can't escape from baptising as churches felt that the visiting preacher especially one who is somewhat senior or "respected" should conduct the baptism ceremony instead of the church pastors or elders. This November-December period is certainly memorable if only for the travelling and preaching and I told myself that next Christmas I shall take no more than 3 speaking engagements and if possible escape for a holidays somewhere and not preach at all.
at December 19, 2016