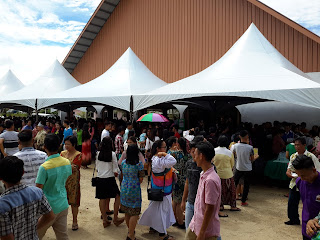 In this part of the world, Christmas comes really early. Within seconds I received notifications of two District level Christmas gatherings in Ranau and Keningau. These are combined churches events often endorsed by Government District offices. Politicians from different religions will attend and probably in Sabah and Sarawak you will see such Christian events celebrated by the community from all walks of life irrespective of race or religion. I am not very much for Christmas events with a lot of speeches and caroling, though this year I took up many invitations to speak all over Sabah. As for me it is an opportunity to preach God's Word that is paramount. Last Sunday in Sipitang my heart was very much encouraged. The hosting church was right beside the main road and as there was not much space for parking inside the church compound one could see cars and trucks lining up both sides of the road for 1km long.
More than 700 adults came in force with canopies at both wings and at the back almost filled up. At the end I called for response and at least 100 people came forward, fathers and mothers and young people including children. Many wept unashamedly in the Lord's presence and Lord if your people return to You with all their hearts, all your servant's efforts for the Gospel's sake are worthwhile. I even responded with a poetic stanza when welcomed by the MC with a pantun. The hosting church's name is Gereja SIB Seri Menanti...and the theme for the Christmas gathering was Hope Fulfilled (Pengharapan yang Terkabul).