This Sunday will go down as one of the most memorable. After rising early to bright sunlight I was eager to go to church. The senior pastor preached a sermon about Christmas and what it meant to risk much by God and those who chose to respond to the angelic invitation announcing the virgin birth. Later we talked and for the first time a pastor actually asked for my advice - what commentaries series would I recommend. Smyth and Helwys! Then we had lunch with my friend whom I knew from 1999 and we had Dim sum lunch. How wonderful it was to renew friendship and fellowship over a meal. 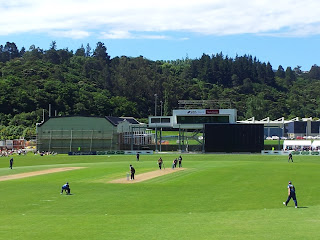 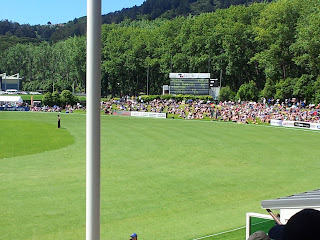 At 2.30pm I rushed to the Universal Oval to watch Otago played Wellington in T20 match. No doubt the star of the game was Jesse Ryder but he got out early making 37 runs and Wellington's run chase piltered out and they lost by about 80 runs. It was an idyllic afternoon with such great weather and awesome cricket from the Otago Volts all round. I can't help thinking that if the Lord wants me to serve in New Zealand, I would have no hesitation, but then there will be little risk and I probably watch cricket all day. I looked around the ground and there were a few Indians and the rest were all white Kiwis. I am the only Chinese Asian. The kiwi bloke sitting next to me was friendly and it helped that I showed some knowledge of NZ cricket. My icebreaker was "Jesse should be playing in South Africa" and we chatted and he hoped Jesse Ryder would rejoin the blackcaps when NZ plays England next March.
at December 23, 2012