My Book is in Indonesia 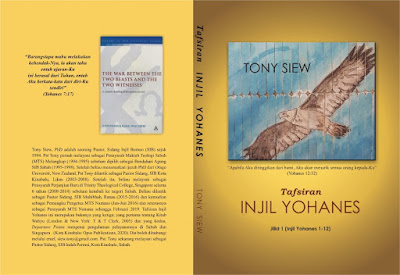 Timing is everything. On the last Saturday before the MCO came into effect, I attended a seminar conducted by an Indonesian preacher and his team. Over lunch he came over to my table and asked whether he could purchase a copy of my commentary on John’s Gospel written in Malay. As Sabah’s or Borneo’s Malay is close to the Indonesian language, I am certain he would not have trouble understanding my Malay commentary on John’s Gospel. Even one of my proof readers said that my Malay is Indonesian-flavoured and my reply was that how could it not be since I was commenting on the Indonesian text of the Indonesian Bible and preached from it for more than 30 years (since I led a home group in 1988).
Anyhow, I am happy in the Lord that my Tafsiran Injil Yohanes has made it to Indonesian shores and I am sure there will be a demand for it if I promote it there. One of the immediate realisation as a result of the MCO was that how fortunate or timely that I managed to get my two books published in the first two months of the year before the month of March took a turn for worse and we are still unsure when we would get out of this health crisis. I also thank God I had now published academic books in two languages (English and Malay) and entered an elite field of authors that can write and publish in two or more major languages. Paul the apostle certainly was a true bilingual though no Hebrew text of his is extant and only 13 of his Greek letters were kept and survived for posterity. And Malay is certainly not a minor language because together with Indonesia you have close to 300 million speakers and readers of Bahasa Indonesia which is in a large extent, a form of Malay, the language which is used throughout Malaysia, Brunei and Singapore.
at April 23, 2020