What is the Bible? 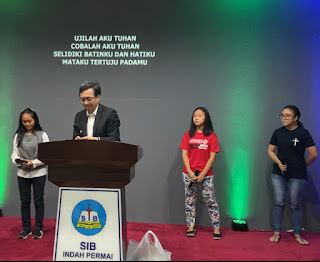 I gave a 85-minute lecture (from 6.55pm to 8:10pm) to a group of young teenagers about the Bible. In times when people can't sit still for 15 mins or listen to a 30-min sermon, it was quite a feat for them to endure an hour and 15 minutes of the talk I gave last Sunday. At the end, I could still see smiling faces and we had a great time. During the talk I covered the history of writing - papyrus and parchment and scrolls. The main divisions of the bible, OT and NT with an acronym - TNK (Torah, Nevi'im, Ketuvim) and the NT with 4 main sections (Injil - Gospel), Sejarah (history, Acts), Surat (Epistles) and Apocalyptic (Revelation) with TNKISSA. I spoke about the original languages of the Bible, early manuscripts, and modern versions and at the end, the four Malay/Indonesian versions and even had time to make a comparison between the Indonesian version and Malay (Borneo) version of the Lord's Prayer.
I am thankful to yer Lord and it reenergised me that more than 40 people came in a third session on a Sunday night (we have a morning and afternoon services during this RMCO). More than 30 young teenagers came with a few youths and senior leaders who are parents of these young men and women. The first class before the MCO four months ago was attended by 21 teenagers so there was a marked improvement which was a great encouragement to me since the members' attendance in Sunday services had gone down considerably. We even had three guests from my former church in KK. At the moment, as far as Malay translation is concerned there is no better than our traditional version, Bahasa Indonesian Bible. It is most unfortunate that both Malay versions (Berita Baik and versi Borneo) don't even come close in terms of accuracy and literary merits. The utmost important factor in a good bible translation is its accuracy to the original languages, Hebrew and Greek, though it is sometimes difficult to attain to that in an intended language of translation. So during the talk, the Lord's Prayer which comes in a short 5 verses (Matt 6:9-13), there were at least 4 words in versi Borneo which I would not use as the Bahasa Indonesian version still retains as good a translation as one could get.
at July 07, 2020