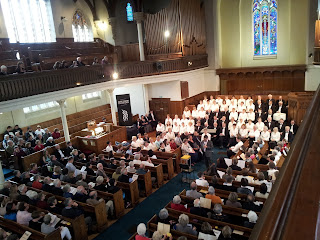 Today at Chapel, the readings for the day were taken from Isaiah 6:1-10 and Luke 5:1-11. The Isaianic text tells of the prophet's vision of the Lord on the throne. These two texts, the commissioning of Isaiah and the call of Peter to be a fisher of men in Luke 5 are among the most influential in my own calling into full-time service. As for Luke 5, Peter experienced the power of Jesus in Peter's profession as a fisherman, so much so that the two boats were about to sink for the  large catch of fish. Peter did not take that miracle as some might do as an inducement to stay on as a fisherman since business was never better with the Lord's help but instead, he perceived his own sinfulness and in spite of it, the Lord could and would bless him in his work.

It was the same for me, in my final year of legal practice that blessing upon blessing came upon my firm and not only was I occupied with all the cases I could take on but also most of the cases I took achieved quick resolution and with that I earned my fees in quick time. Knowing that the Lord could bless me in my business despite my unworthiness I knew the Lord was trustworthy and powerful to provide for me if I went into full-time ministry and become a fisherman of men. In my first 4 years of ministry I had preached to tens of thousands in nearly 100 villages, preaching over 300 sermons in the process. The Isaiah text was never far from my mind and as my ministry progressed in time, it dawned on me that not everyone had faith and many people were equally hardened like Isaiah's target audience. The Lord encouraged me to soldier on because it was faithfulness and obedience to the call and mission that mattered, not success as measured by worldly standard. The prophet Isaiah was tasked and sent into a mission of futility for very few of his countrymen would listen to him. Even now sometimes I wonder whether anyone is listening to what I witnessed of the Lord - the things I have heard and seen from the Lord and His words of holiness. On one hand, there seems to be a big catch of fish - I am preaching in many churches and to many people and my classes are well attended, but alas how many really paid attention and believed the testimony of the Lord through his servant for who is blind but my Servant and who is deaf but the Servant I sent, saith the Lord.
at February 06, 2013