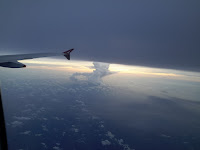 When I landed in Kota Kinabalu I had this vision of a man in linen, "shouting on top of his voice". When I arrived home I read from Psalm 66,1 "make a joyful noise to the Lord, O ye lands" (KJV). King James Version is still my favourite because oftentimes it tails in nicely with what I have been thinking. Ye lands, rather than all the earth as in many other versions. Ye lands speaks of many lands and there is one place and one land which God wants us to be at one time though we might travel to other lands for ministry or holidays. That land to me is Sabah. I felt such a joy upon reaching Sabah after a whirlwind tour of Singapore and Seoul in the past fortnight. In Singapore I met up with many friends and I was hugely encouraged by it. In Seoul I stayed as in a foreign land, no English spoken when I got lost but most Koreans were really kind as they tried to show me home in their Korean knowing that I could not understand a word.
But I got to know two Korean professors well and a third from my visit in Perth 3 years ago. I also chatted with a Hong Kong professor whom I knew back in 2010 in Hong Kong then in Perth and reacquainted in Seoul. Another Hong Kong prof emailed me after I finished my paper on Jezebel in Rev 2. I received commendation from 5 or 6 professors for my paper on Psalms.  One Korean professor spoke to me straightafter the Psalms seminar and thought I did my PhD on the Psalms.  That was high praise indeed. All praise be unto God. I wrote to my only active whatsapp group (I used to be active on  6 or 7 groups but since exited from them all) and told them why I thought I did ok in my psalms paper. I read the Psalms of David for more than 34 years almost daily. They are part of my life, identity and ministry and it is my favourite biblical book more than John's Gospel and Isaiah. I know many psalms by heart and had put music into 6 or 7 psalms. We will sing my songs in the house of the Lord (Isaiah). Sabah, why Sabah? Sabah is sabbath, in Hebrew. It is a land of God's rest. Though I labour for God I work in His strength for I have entered into God's rest in Sabah. People say why should you focus on just a few tribal groups of one million in total, only found in Sabah?  Isn't the world a big place and you can serve many peoples and nations greater and bigger than the indigenous peoples of Borneo? But I can be only in one place at one time.  The brook of Cherith is my home now, and that home is Sabah.
at July 11, 2016