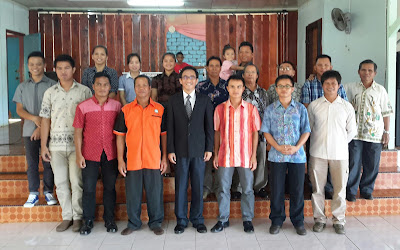 It's time again. It is the season of the year. If I were a pastor or pastoring, I would be now planning for a leaders' retreat in November and reflecting on a year that has been and planning for the year ahead. As we enter the final quarter of the year it is good for me to take a couple of days off to reflect on the year that has been and plan ahead for 2017. It is been non-stop ministry for me for 7 weeks now since being back teaching at the Bible College. My itinerant ministry continues to flourish, not only preaching twice to thousands of youths three weeks ago but the following week I led a Retreat where I had to speak for 7 consecutive hour-long sessions with much prayers besides. During the Retreat on Saturday night, I made an altar call and many responded for prayers. There was strong weeping and tears flowed freely as God's presence was strong in our midst that night. I prayed for about 30 minutes and by the time when it all ended I had spoken for 4 sessions during the day and had another 6am start the next day for another 3 sessions. And I was especially touched to see a young girl who sat behind me at the second row. During the ice-breaker I picked up her name and when I spoke to her and said, "Are you Form 1?" and her reply was "No I am only 12 years old, Primary Six!" I asked her, "Do you understand most of what I shared?" and she nodded as if she did understand most of it. And she responded and was prayed for and the Lord touched young lives during the 3-day Retreat. I also saw a 13-year old praying for many older youths during the final day of the Youth Conference. Young men and young women shall prophesy and your sons and your daughters shall see visions.
And last Sunday I led my College's cell group of about 9 students to a nearby church in Ranau. One of my students comes from the village and she had introduced us to her church leaders. I preached a pretty long message on Eph 5:1-14 (Become imitators of God) emphasizing on love and light as being God's attributes which should also be His beloved children's attributes if we imitate our Father. I spoke about holiness and avoiding sexual sins and not even mentioning about them. It was a powerful message and at the end about 15 people came forward to be prayed for. It was a delight to see many older folks including leaders and deacons coming forward and responding to God's Word. Again there were tears of contrition and many felt God's presence wonderfully.

After a short rest back at Namaus, I drove back to KK at 4.30pm reaching home just after 7pm. Yesterday I attended my former church secretary's wedding held at my homechurch in KK. She had told me about it several months ago and it was an honour to be invited to take photos with her and her groom alongside her newly wedded husband's employer. Again that moment was poignant that in a way I was her "boss" when I was pastor of my homechurch and for 5 consecutive years when I was in Singapore she had sent birthday greetings to me along with the wishes of the Woman's ministry leaders. No doubt many women (young and old) have proven to be my strong support over the years like Jesus in Luke 8 where several women were named and one in particular was said to have supported Jesus' team and ministry with her finances. Jesus had her Marys, Mary Magdelene, Mary of Bethany (and his mother of course) and Marthas as well. I have always thought about leadership and if you are a good boss, your subordinates will remember you well and you retain their friendship for life. 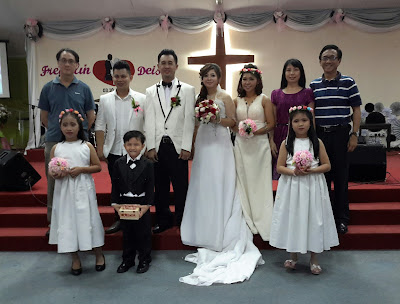