3 Times is Blessed (Life of Joseph) 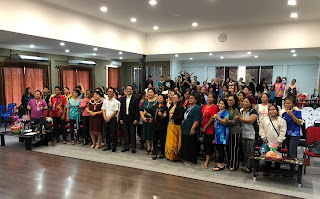 I have now visited the Kudat church for the third time. I gave a 2-hour end-time seminar in July 2015 with the Ranau's Pastors Fellowship. Last year I led my College Family group and preached a sermon on the Feast of Tabernacles. Yesterday I completed the blessed third time (3 is the number of the Godhead - holy, holy, holy) and God is Triune and God is One. I preached a message from the book of Genesis (origins) from the life of Joseph. I started by reading Jacob's blessings in Genesis 49 where the word, "blessing or blessed" appears five times (5 is the number of grace) and in Deut 33's Moses' blessings on Joseph the word "bless" introduces the prophecy with the word, "choice or choicest" appearing 4 times. Joseph is the prince or leader among his brothers. I spoke about his long and coloured robe, pointing to Joseph's potential and future as a naturally gifted leader. He did not go to School or study in the top Universities in Egypt like Moses but God was with Joseph and blessed Joseph with the gift of leadership, administration and management from Potiphar's house to be in charge of prison and then exalted to be Pharoah's right hand man to lead Egypt, first in the times of prosperity and then, in the times of famine. Joseph went through a lot to say the least.
He was hated by his brothers, almost killed by them out of jealousy. He was slandered by Potiphar's wife and thrown into jail for a crime he did not commit. But in God's time, he was released and became the premier of Egypt the greatest power of the time. I spoke about the difference in the Pharaoh of Moses' time and Joseph's Pharaoh. The latter recognised Joseph's gift and the Spirit of God in him, and recognised his leadership ability to bring the plan to save and keep wheat in the times of abundance in order to survive the times of crisis. I made an altar call and in the beginning a few came up but but the time I started praying for those who came up, there were at least 25 people more, which was a third of the adults present in church yesterday. A number of people wept. I invited them for prayers if they were not certain of God's presence like in the life of Joseph. I prayed that they would have the conviction that Jesus, Immanuel (God with us) is truly with them. He is ever present to help those who believe. Throughout the 50-minute sermon, I only shared one testimony when I gave some background to Joseph's story. His great grandfather was Abraham. I told the congregation that how I acted by faith. I was 28 years old. I sold my law firm. I took my family (my wife and my 2-year old son) to New Zealand with a few bags of all my belongings. We sat at the Onehunga centre, Auckland. I prayed to the God of Abraham where I should go - whether to study in Auckland or Otago (only these two Universities offer theology). I felt the Lord leading me to remain in Auckland. I started intensive Greek for 2 weeks and in 2 years' time, I began my life of mission in the interior, teaching in Melangkap Campus.
at September 23, 2019