A Family Reunion of Magnitude 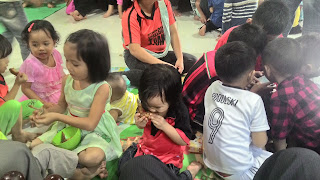 In a week that I am not preaching on Sunday, I have preached three times, on Wednesday, Friday and today at a family service. Today's family gathering was a grand affair. I was invited three months ago and somewhat I honoured that invitation despite receiving an invitation to preach over 3 services in Kota Belud, a District level event. I am glad I chose this ministry as I learned much from the Dusun culture. This family had 10 siblings and 7 are still alive and out of these 10 siblings the family now has about 300 members, children, grandchildren and great grandchildren.
This was the 7th year running they have this family reunion time from one sibling's house to another. It happens that today's family gathering took place in Ranau and it was just about 10 minutes drive from where I am. When I reached there, I sensed it was no run of the mill gathering as 150 people were already seated under a large tent and canopy set up for the reunion service. As most family members are Christians, with SIB members being in the majority, the family service has always taken the SIB style with an SIB preacher invited to give the homily.

Today I preached from Prov 23:17-26. It started to rain and the noise could be disturbing at times but the sound system was excellent without which my voice would have been drowned by the rain drops falling on the roof. When I finished my sermon the rain took a worse turn so much so the wind was howling and the waters began dripping into chairs and seats in the tent. The MC asked us to enter the house to get away from the storm and for about 20 minutes I could see the winds driving the rain fiercely with branches of trees bended 45 degrees to the way of the wind.

It was a good time of fellowship with church members though most of them were not from my church. They came as far as Sandakan and the crowds were building up as I left the place at 4.15pm. In between, I was asked to pray for the 7 siblings most of whom in their late 60s and 70s. The kids were running around and I enjoyed sitting in their midst as if Jesus was present and saying to us, "let the children come to me." There is always an innocence and joy in a child that an adult could emulate.

I spoke about fearing God and having a hope for the future despite the rise in the cost of living with GST and the fall of the Ringgit. A couple of church leaders spoke at some at length with me and in a small setting such as these with 30 toddlers and young children running around, I managed to share my views on many things, some on current issues in the country, on the use of the name of God in Malay, and ministry in general. Even on the way back, I managed to share with the driver how I raised money to build a church during my former pastorate as he asked how the church building was going in my present church. All in all, it was a fruitful afternoon and I got back home with great joy having served the Lord and His people.
at August 29, 2015