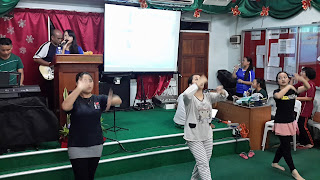 I can't say what it is. Last night I attended the full rehearsals of the Sunday services from 7pm to 10.30pm. I had a great sense of expectation what was going to happen on Sunday. I just got back in Ranau early yesterday morning but with my worship team I sensed Gods presence strong unlike the two major Conferences and Concert I attended in KK. God may not be with the crowds and big events but among small groups meeting to honour his Name, He is there. This morning by 7.50am all 180 seats are fully taken. We added 50 more seats with 20 seating behind the pulpit and some at the sides. The ailse was taken up with stools to make room for everyone and God's presence was felt almost tangibly throughout the two services.
In the 2nd service we made room for tambourine dancers and took off two front rows of chairs but we still easily had more than 150 adults in the 2nd service. I relished the chance to speak over two services when the elder asked me to replace him in the first service. I spoke from NECF prayer book for the 10th day about preparing the next generation of leaders. I felt I connected throughout. I peppered strong exposition with current illustrations about leadership. I chose two of my favourite young leaders of the Bibke, Joseph and Daniel. I explained that Joseph did not rise out of a sudden to become the 2nd most powerful person in Egypt as it was made out to be by certain quarters. Joseph was prepared for great responsibility when he was put in charge of Potiphar's household including his farm. In ancient times wealthy people owned and controlled land. Joseph was probably the CEO of large business holdings in farming buying and selling produce from Potiphar:s land. And it is said God blessed Potiphar on account of Joseph. Then in prison, Joseph was handed the task of running the whole prison until his release. These two responsibilities of handling personnel, property and criminals apparently prepared Joseph for the task of ruling Egypt. Likewise, Daniel already knowledgeable, was educated for 3 years at the University of Babylon to serve the king. As much as it was for God to give wisdom and knowledge, Daniel was prepared for the task of advising the king and God exalted Daniel to be the head of all the wise men and he stood heads and shoulders above them all. The second service was given to encourage the church to trust the Lord for our daily needs in light of the worsening economic conditions in the country and the talk in the coffee shops everywhere in KK and in Ranau is about the sharp fall of the Ringgit. Matt 6,33 came in handy and the congregation was comforted with God's Word and with the Holy Ghost. After a quick lunch with an elder I rushed back to prepare one last baptismal candidate for baptism next Sunday. She had missed one class and needed more instruction.
at August 16, 2015