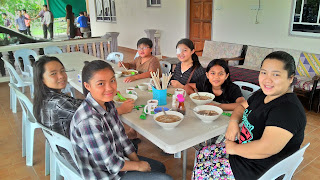 Today I baptized 6 believers by immersion. As the trend goes, there were 5 girls and 1 boy. Our tradition sanctions baptism for 12 year old and above but today I made an exception for two 11 years old to be baptized with the rest. One teenage girl had an eye infection and it was interesting as to how to proceed. It would not be good to get her eye wet if she would go under. I asked her whether she was still keen to be baptized today and when she said yes, I told her that I would submerge her to her shoulders and neck and then pour water on her hair in the name of Father, Son and the Holy Spirit. 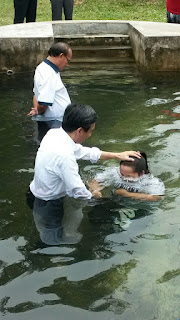 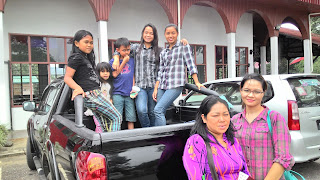 We had a noon baptism out in the open air at a baptismal pool in our first SIB church nearby. The pastor there who is a close friend helped me and I appreciated that he was prepared to get himself wet though he was not obliged to. I guess the good vibes of the Pastors fellowship helped. So I walked down to the pool with water about 4 feet deep and straightway felt the cold up my spine. My feet went numb. Later I was told that the water came all the way from Mount Kinabalu. But as pastor I had to put up a brave front and duly one by one I baptized the candidates in the name of the Triune God. It was over in 20 minutes and with a change of cloth I took my flock to feed on green pastures, enjoyed mee soup in the church-run restaurant.  I spent about 40 mins with them talking with the newly baptized. One girl who had a bandage on her eye who spoke Mandarin for she is a sino-Kadazan. She asked me about Australia as she has ambitions to further her study there. I told her of my time in Melbourne and encouraged her and others to dream big. But besides the brother and sister who are both Chinese educated, the other four are not so fortunate. One Form 3 girl almost gave up school as the family is too poor. She spent a week out of school to help her mother harvest padi fields a couple of months ago. They are living with their auntie and I just found out that a number of women folks have their husbands working in Singapore. It is tough for them to see their husbands once a year and their children grow up without their dads. So much for job opportunities in Sabah. Many of our church folks struggle financially but the Lord cares for them. I would think they have not a care in the world when they leave the church with joy and smile on their face. So after lunch I took a few of them back to their home in a nearby village. I was comforted to know that in Ranau apparently it is legal for passengers to ride at the back of a truck. I am sure they have a good ride and it will be a start of a journey for them to follow Christ. Half my church members later attended the Walk for Jesus parade with more than than 1,000 participants but by 3pm I was just too tired and went home to sleep. 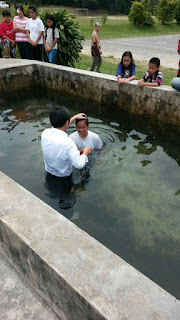