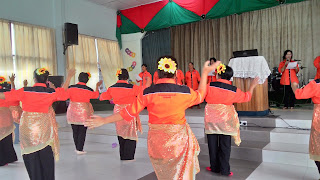 We celebrated women's Day in Ranau today. I was the invited speaker and after 10 songs and several dance presentations we had a praise and worship session. I went up to preach at 10.30am and it went for 45 minutes. I was led to call for prayers and about 70 women came forward for prayers. It was an emotional time for some women and I believe the Lord strenghtened them through his Word and the supply of the Holy Spirit through prayers.
I preached on Deborah's song in Judges 5 and ended with a short commentary on Luke 8,1-3. The theme of my message was for women to rise up and fight the Lord's battle at home and church. It's time to take the lead if men refused to become leaders like Barak in Deborah's time. I spoke about being readied for battle and the spirit of volunteerism. I talked about sacrifice like Zebulon's tribe ready to fight with their lives while Rueben appeared reluctant for his many deliberations. Too much caution and deliberation often makes a person slow to join the battle. I talked about leadership. After Ehud died the people of Israel began to do wickedly. When Deborah won the victory the land had peace for 40 years, a whole biblical generation because there was a mother in Israel. Later I was told the 200 plus turnout was the highest thus far since the annual event began in the late 80s.
at August 22, 2015