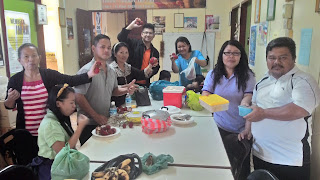 It's been more than two months since the earthquake and one immediate effect was the incessant demands for ministry. Everything seems to be doubling up and last night I had a back to back meetings in two families, both were thanksgiving and memorial services for deceased loved ones. First, I preached from Matt 22 on Jesus' dispute with the Sadducees concerning resurrection. This family had 10 adult children and it was a microcosm of Ranau community split between Christians and Muslims. While I was preaching to 6 or 7 siblings with their families and the widow who were Christian believers, their Muslim siblings politely gave way and mingled among themselves in the kitchen and rejoined us when the service was over and refreshments were served. I took the opportunity to preach Christ, and having a loud voice helped as I think everyone within the vicinity of the house heard what it meant to believe in Jesus and the Resurrection hope in Christ. It was a 5pm meeting and by 6:30pm, I rushed home for a short break before heading to another home. I preached from Matthew 15:1-9 on Jesus' command to honour our father and mother with our money including the money pledged as an offering to God should instead go to the care of our aged parents when there is a need for the latter.
The elder's mother passed away last week but it was his care for his mother for more than 2 years that touched our hearts. He had to wash and bath her daily as she was bed-ridden and it was remarkable testimony of a son's love for the mother. Though the elder has two sisters, he was the one who bore the burden of caring for a sick mother until she called home by the Lord. I think my sermon moved many by the grace of God. These two sermons came after chairing a long pastors' fellowship meeting on Wednesday with the District Superintendent present from beginning to end. We ended the meeting at 2pm with lunch and my fellow pastors all enjoyed my mangoes and rambutans. I told them that they could always drop by my house in KK to try out more mangoes and rambutans next week during the Pastors' Conference. Tonight I shall be preaching in another elder's home and it will be on the birth of a child in Isaiah 9. I thrive on house meetings, as I was trained in the art of preaching during home groups in the late 80s and early 1990s. I led a home group for more than 2 years, preaching weekly to a group between 5 and 20 adults. Do not despise the day of small things. If you are faithful in little you will be entrusted with more...
at August 07, 2015