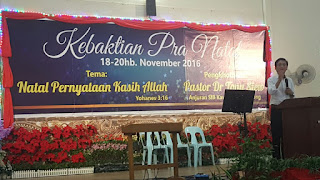 In my fourth and last sermon on Sunday, I preached from 1 Corinthians 16, the end of Paul's first letter to the Corinthian church. I told the members gathered from 14 churches of the District of Mendulong not to neglect the final words of Paul in his many letters as often times such endings provide us with spiritual gems of immeasurable value. I proceeded to preach from 1 Cor 16,9-16. I told the audience that often times when a great and effectual door is opened for us there will be much opposition. Do not think for a moment the devil is not out to try to destroy the work of God through God's servants. Especially so for us in the front line in the battle field the opponents and opposition would seem many and without ceasing keep attacking and trying to rob us of the joy of serving the Lord. After a  long weekend away from Friday noon to late Sunday evening, my energy was totally spent. I spent the whole day yesterday catching up on sleep as I barely slept in my 3 days away.
The meetings were incredibly long, often 3.5 hours and I was asked to preach at 10:30pm on the first night and on Sunday morning with several speeches, songs and presentations I preached at 11.20 am almost 3 hours after the meeting started at 8.45am. Saturday morning in my 2nd sermon, I was listless and fell asleep once in my seat (God forbid) as after a 4-hour drive and 3 hours' sleep my body simply could not keep up with all the activities. But thanks be to God, I preached an hour long sermon nevertheless with the energy coming not from me but from the Holy Ghost. The best was kept to the last on Sunday where I preached for 1 hour and 5 mins and found myself going strong at the end. There could be only one explanation. It was the Lord's enabling strength for me so that I could minister to the saints. I had no more energy to make an altar call but instead I asked everyone to remain seated when I led them to sing a song in response of God's word. I told them if anyone wanted prayers he or she should stand up where they were. One by one stood up at least 200 people stood up out of the 500 strong congregation. If I had made an altar call perhaps at most 100 people would come forward so in this way I prayed for double the numbers and at the same time conserved strength knowing that I had another 4 hours' drive back to KK. Indeed a great and effectual door is opened for me among the tribal peoples, among the Lundayeh and Murut Tagal of Mendulong district and other districts beside.
at November 22, 2016