The Week that Was

I could only marvel how so many events came together with some measure of success despite last minute preparations and frantic activity. Last Wednesday's Closing Semester service went for 4 hours from 7.40pm to 11:40pm. We had a full service, a song & dance galore and Christmas celebrations with exchange of gifts all in one. But we were mighty pleased and we returned home past midnight filled with joy. Then on Thursday preparations for the graduation dinner and convocation the next day took full steam. As I was in charge of the display section, I had to make sure everything was in order and we made several trips to the venue (Ranau Sports Complex) the night before. Graduation dinner was a pleasant experience with a wide selection of dishes all cooked by the College's kitchen staff (500 people on Friday night and more than 800 people on Saturday's convocation lunch reception). It was a herculean efforts by any measure with our limited resources and wooden kitchen hut housing several stoves and fire place. But non-graduating students helped out and worked their hearts out and I made rounds around the Campus late Thursday night.
Some were busy printing the convocation booklet in office, making sure all the 261 graduands received their diploma scrolls. When I went back the next morning at 5am to the office the team was still working with one or two slumped in their chairs fast asleep. On Friday morning we had a full rehearsal at the Ranau Sports Complex, for the every first time we held our convocation outside of a church in our College's history. As there were about 200 students receiving their certificates in ministry (Long Distance Theological Education, Pendidikan Teologi Jarak Jauh) it was quite an effort for my colleague to marshall everyone in their place and line up for the procession. On Friday night, it rained whole night and we wondered whether there was a good or bad omen. One person took it positively as the Complex was without air-conditioning so a cool and rainy day wasn't all that bad. But the rain stopped when the convocation ceremony commenced and it all went according to plan. I had to leave as soon as the bachelors received their scrolls as I had a speaking engagement in the district of Kemabong, some 4 hours' drive from Namaus. We went back to the Campus and packed our things and just after 1pm we set out from Namaus and reached the Kemabong church just before night fall, having stopped in Tambunan for coffee and also in Keningau on the way.

The church was packed for the night service and it was doubly packed on Sunday morning with many having to sit outside with a large canopy providing extra space. It was Christmas celebrations for five Kemabong central churches (churches that are near Kemabong township). I preached the night message speaking for a gospel for all nations and tribes and exhorted the church not to be inward looking for reach out to outer races and ethnic groups besides their own. With these 5 churches of 98% Muruts, it was a tough message to convey since one's culture and race is still very strong and outsiders find it very hard to break into the group. As the only Chinese Malay-speaking pastor that is by now accepted by these indigenous groups, I find myself in an unenviable position, at once an insider (as one senior leader called me thus since I served one term as Treasurer-General of SIB Sabah) but on occasions I felt I am just like an outsider, foreign to my own brothers and sisters in Christ. But I find little of that at College which is so encouraging as I can categorically state that a vast majority of my students accept me as one of their own and from one Semester as their Acting Principal, many still accord me respect and love. Yes, love...where at the service bidding me farewell as Acting Principal, the students put up a video and at the end of it with the picture of whole College community, words are inscribed, "We love you." 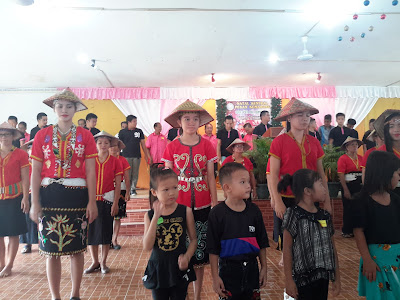