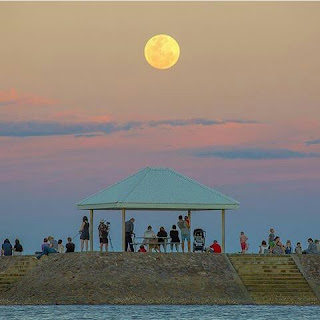 There was a famine in the land in the days of Isaac just as it was in the days of Abraham (Gen 26). Famine or severe economic crisis for poor people does not seem to abate where I dwell. The Ringgit has fallen to new lows, 3.1RM to 1SGD and nearing 4.5 to the USD. Food prices have gone up and a cup of coffee at hawker's stall once RM1.50 just last year is now 2.20 or 2.50. Inflation due to the fall of Ringgit and the rise of the cost of living hits the poor hard. I spoke about the 3rd Seal yesterday at FGB meeting in town about what would happen to us when 2 pounds of wheat will cost RM40.00 (labourer's daily wage) or a 5kg of rice will cost two days' wages. Those days will come as predicted by Scripture and countries that are well governed with strong institutions and the rule of law will survive better than those ruled by unstable personalities where corruption and evil reign supreme without anyone able to stop the rot from getting worse.
The thought of going down to Egypt as Isaac did also occured to me (returning to Singapore) but I read chapter 26 of Genesis thrice and I was hesitant to move away from where I am unless I feel the Lord's leading clearly. My Gerar is Namaus, at the edge of the promised land even as Gerar, geographically part of Canaan but in Philistine territory. I only have to look to the Lord to survive the famine in the land, perhaps like Isaac blessed 100 fold because for the Lord nothing is impossible and He is well able to keep His servants alive in famine and economic recession.
at November 24, 2016