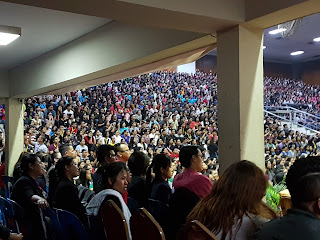 Last night I attended our annual Youth Conference (38th) where more than 5,000 youths and some older adults packed the largest hall in town. My good friend preached an excellent message. I met him at the entrance and thought he was going to preach on the third and final night. But he told me he was preaching all three nights as the other invited speaker could not come until the last day's morning sessions. It was electrifying seeing 5,000 youths in worship and hunger for the Word.
Being Seminary trained my friend stayed close to the text in contrast to last year's opening message that was mostly allegorical and plenty asides. My friend preached about Simon the Cyrenian who came to Jerusalem for Passover but met with Jesus in the most unusual of circumstances. Simon was forced to carry the cross and the preacher noted that Simon witnessed the sky turned dark midday and great earthquake as well. Then the preacher opined that Simon could have stayed behind for Pentecost where 120 disciples spoke in unknown languages understood by many Diapora Jews of various tongues including Cyrenian. Simon must have been converted then according to the preacher and witnessed to his family wife and children as later Paul asked to greet Rufus the son of Simom the Cyrenian and his wife as well. The main point of last night message is that before one could be Christ's witness one has to have a personal encounter with Christ like Simon the cross bearer.
I think it was wholly appropriate for teenagers as 90% of those attended would be in Secondary School. One added highlight was three young men acted out the part on stage as Jesus, Simon and a Roman soldier. The worship was great as I saw mostly youths from KK churches led worship. Outside the door after the service as thousands streamed out I caught up with a former church member in Ranau. She was 2nd year Chemical Engineering student then but now she had graduated and within weeks will be flying to KL for work with Shell. How time passed and my friend told me after Sunday morning service that he no longer goes to Youth Conference (we are in our 50s) but I thought for me with a Statewide ministry I have to keep in touch with the youths. Wisdom is with the aged but strength of the youths is needed as never before.
at August 28, 2017