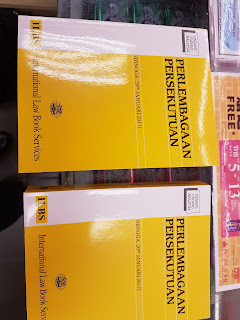 I have to travel about 17kms into Ranau township for a coffee break. After three consecutive days of lectures I thought I needed a coffee break. I was thrilled to utilize my legal knowledge and history by delivering two-hour long inaugural lectures on the Federal Constitution of Malaysia. Almost all legal and political issues today have their takes or disputes over how the Malaysian Constitution is interpreted by politicians and judges.
One current issue is on unilateral conversion and apparently today's amendment to the Laws of Marriage and Divorce Act allows for unilateral conversion which means the child or children of a parent who converts to another religion could also decide to convert his children to his new religion. What about the other aggrieved parent who might think that her children should remain in their religion of their birth before the conversion of the parent? This may go to the highest court to decide whether one parent who has custody has the right to convert his children under 18 years old and also whether jurisdiction falls with the civil courts or the syariah court if one parent converts to Islam for instance. Malaysia in a way is in a crossroads having two systems of jurisprudence, one civil and one of a religious nature and with many mixed marriages and divorces the status of children of divorced parents and their religion will be a problem to resolve for years to come. So knowing the provisions of the Constitution certainly helps, at least in understanding the nature and complexity of the issues in question.
at August 10, 2017