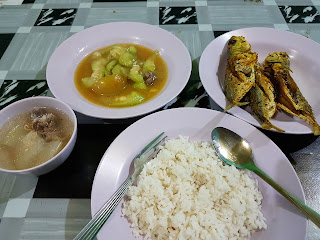 Fish is frequently mentioned in the four gospels. So much so in the late first century and second century the sign of the fish had become a symbol of Christianity even more popular than the cross. Jesus ate fish. At least four of his disciples were fishermen. Peter the chief apostle was a fisherman. It was as a result of a great catch of fish that Jesus issued his famous summons that "you will become fishers of men". And the Gospel of John ends with the mysterious 153 large fish caught by the disciples (photo: food at the Student Dining Hall).
At one level it is a sign that Jesus' resurrection will give the impetus for the disciples to be sent into the world and Gentile nations will become part of the people of God alongside Israel. 153 is 51 x 3. 50 stands for Israel as Jubilee states that one is return to his own land in the 50th year so that the land of Israel is never to be dispossessed or uninhabited. The number "1" stands for the rest of the nations. Is it fair 50 shares belong to Israel and only one for all the nations? But Israel is the tree and the Jewish Messiah is the root and Gentiles are foreign branches grated into the one olive tree. Israel is the first born son and heirs of God. Tonight like Jesus I ate fish. Not the expensive type but that consumed by ordinary folks. Last week in KK I attended a family dinner as my brother and his family came from Singapore to visit. The waiter brought into our room a fish dish which we did not order. The captain shouted to the waiter and said the fish was for another room of diners and that the fish served cost RM1,800.00. Tonight my dish cost RM4.00 with soup and vegetables besides.
at October 23, 2017