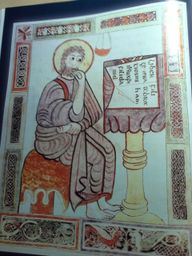 I have spent two extra days preparing tomorrow's lectures on Mark's Gospel. I plan to give one hour to the question whether Jesus when speaking in Hebrew (citing Deut 6:4-5) in Mark 12:29-32 pronounced the sacred name, YHWH. Obviously the Greek of Mark has kyrios but that is Greek likely following LXX Deut 6:4. But Jesus probably spoke Aramaic and when citing texts from Israel's Scriptures would have used Hebrew.

The evidence as far as I can gather is that in the time of Jesus, the pronunciation of the sacred name is not yet prohibited as it happened in the mid-2nd century onwards. Even the Genizah Psalms of Cairo (dated 40 BCE) has YHWH in a number of places throughout the four Psalms. See David M. Stec, The Genizah Psalms. A Study of MS 798 of the Antonin Collection (Brill, 2013). And Qumran scrolls dated 1st century BCE to mid-1st century CE still have the name of YHWH written and probably read and pronounced as Yahweh in many places.
at August 21, 2013