The Use of the Name YHWH 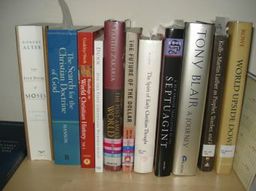 I came across Sean McDonough's book, YHWH at Patmos (1999) when I just began doctoral study in 2000 and it is a delight to read it again today. The second chapter, "The Use of the Name YHWH" is especially significant where McDonough conducts a historical survey on how the Name was used throughout early Judaism to the NT time up to Philo and Josephus.

The last chapter concerns John's description of God as the one who was, who is and who is to come and whether John's use is influenced by the meaning of YHWH and the LXX translation of the name in Exod 3 as ho on (The Being, or the One who is becoming or the One who is or exists...).
at August 20, 2013