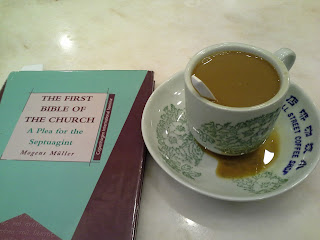 Mark E. Biddle in his commentary on Deuteronomy in the Smyth & Helwys series calls the Feasts of Israel - supersabbaths.  Yesterday I had a supersabbath, resting without worrying about preparing for lectures but simply reading for enjoyment. I have finished reading Mogens Muller's The First Bible of the Church: A Plea for the Septuagint in three sittings over the week-end. Yes, I am a Septuagint fan.

After meeting a Professor of Septuagint Studies during the recently concluded SNTS Conference, I came back inspired to read more of the Septuagint and everything to do with the LXX. I took out 8 or 9 books on Friday and they kept me busy during my supersabbath. It's incredible that almost all our English Bibles are based on the Hebrew text (MT) while the Bible of the early Church was undoubtedly the Septuagint. It wasn't until Jerome translated the Jewish Scriptures into Latin from Hebrew that Septuagint began to lose its near dominance in both the Eastern and Western church in the best part of 350 years. Augustine rightly pleaded with Jerome not to mess with the Septuagint but to no avail knowing how Jerome tended to be stubborn in most things. He is not to be blamed for an excellent translation of the Hebrew text to Latin which later became the official translation of the Western church for almost 1,000 years, known as the Vulgate. But the Eastern orthodox churches today still uphold the LXX as the Old Testament of the Christian Bible, valuing the Greek text above all else. I think it is high time that English Bibles translate from the LXX beside the Hebrew MT so that the New Testament texts could be better understood as most of its authors quoted or alluded to the LXX when they wanted to refer to the Scriptures of Israel.
at August 04, 2013