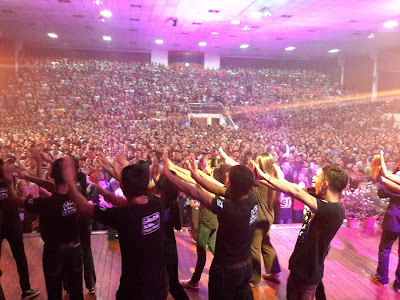 I can't explain why I did not preach well in my two sessions during the 37th Youth Conference which ended yesterday. Perhaps I was seated next to the speakers and loudness of the music and bass just prevented me from worshipping the way I used to. If there is a next time, I will insist I sit or seated far from the speakers. But I am fairly satisfied with the two messages I delivered. Although I did not feel the surge of the anointing which I usually do in my preaching but I think I managed to get the message across. What I learned is that numbers mean little to the Lord.  I felt a great anointing preaching to 50 students on 30th August after a 5 hour midnight journey but I fell flat preaching in front of 5,000 people. But the SIB youths are a wonderful and loving generation that loves the Lord.


I got a few claps when I shared a few testimonies, how I learned English from primary 5 after being embarassed by  primary 2 girl who spoke perfect English, how I learned additional maths and scored A2 for SPM, how at 24 years old I was sole proprietor of a law firm, how the Lord answered my prayers after the Ranau earthquake and restored the water within a week instead of 3 or 4 weeks as announced by the government. I told the youths to increase the ability so that God can give them gifts and talents. To pursue knowledge, to be faithful in our service, to retain their ideals and pursue their dreams and not feel that their culture or tribe is holding them back. I shared how South Korean women grew 8 inches taller in 100 years because they moved along with scientific discovery and eat with discipline and nutritious foods. At the night session, I talked about being in peace with God based on Job 22,21-30. I shared with them how God's love is not dependent on feelings or emotions per se but the fact of Jesus' death on the cross 2000 years ago. I told them to love God's Word and allow God's Word to dwell richly in their hearts. I shared with them how in the 2 months I was waiting for my new appointment I woked up at 3.30 am and on many occasions spent 3 to 4 hours worshipping the Lord singing spiritual sings,  praying and meditating on His Word. I told them to enjoy Gods presence not just during Conferences but daily rejoicing and taking delight in the Lord and He shall give you the desires of your heart. 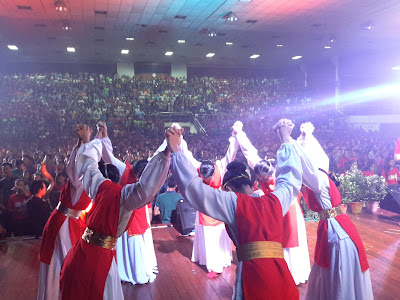