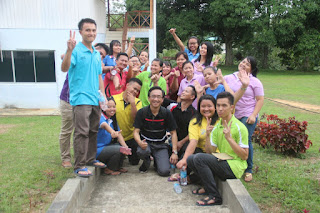 I have been back at College for more than 3 weeks now, For a second time within a month I joined the SIB HQ staff prayer meeting this morning. I am in town for a few errands and to make sure my preparations for next week's Youth Conference get some quality time. Still much to do and it is like two half messages, none complete but in progress. I also stay back in Kota Kinabalu to take a breather from the activities of the College. It can be non-stop running around for teachers and students alike having different things going on at various times. Last Tuesday we have had this Merdeka celebrations and cultural night where men and women donned their traditional costumes.
It was beautiful and exciting and I danced freely that night as I had just preached about David dancing before the Lord a few days before that. The students probably were wondering why their teacher was exuberant and filled with the joy of the Lord.  Then on the Merdeka Day itself last Wednesday we had a whole morning sports days under the hot sun. Though I did not participate fully I went out into the field several times and got sunburnt for it. Some of the Dusun girls became red when the sun bore down on them but they became fair again in no time. But I stay dark and I try to escape the fiery sun as much as I can.

These few days I struggled within myself as Scripture says that a warrior is no warrior unless he rules his own spirit. I have to learn to control my emotions. I can get elated but also downcast the next momen too easily. Perhaps suffering from the Elijah syndrome that after the victory of Carmed he ran for his life when Jezebel threatened him. Perhaps this is one painful contradiction in life. Joy does not last forever at this side of the eternity and thank God neither does sorrow have its final say. How to find the equilibrium and arrive at tranquillity is key to emotional health.

These few days I also learned to trust the Lord wholly and not share with friends what I am going through. The only group that I am close with I already exited in the pain of misunderstanding and perhaps hurt among close friends. I told one person dear to my heart...I pray that our friendship can survive beyond this group though I am not sure of the response or non response. Friendship is tested at the crucible of uncertainty and pressures alround.

But ultimately the reason why I returned to College mid Semester was to train warriors in the spiritual warfare to advance the kingdom of God and perhaps the daughters of Jerusalem can rejoice when the Lord restores His people and blesses the land with His salvation.
at September 06, 2016