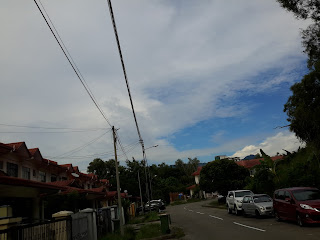 Perhaps I have spoken too soon. Sometimes I run on adrenaline though my strength is far spent. The whole weekend I was almost homebound as I recuperated from the exertions of the past 72 hours in Namaus. The constant travelling at 5,000 ft above sea level, up and down, twisting and turning had gotten to me. I am glad that I turned down the opportunity to teach an extension class in Papar on Saturday. I need to be well rested for the Youth Conference starting tomorrow night. I may even take up the offer of hotel accommodation near the venue to save me 45 minutes one way travel from my house through heavy traffic. Kota Kinabalu is not the same like 10 years before. During my pastorate in KK 2003 to 2008, the traffic was still manageable, one just needed to avoid the peak hours. Last week at 3pm I took about an hour to travel less than 12kms. My sermon is almost ready in my heart though not on paper.
I will write short notes soon but come Thursday I will speak as the oracles of God, by His grace. In fact, I look forward to the end of the Conference so that I could continue to prepare my lectures on the Prophets. I had just done Daniel over 3 weeks and now it will be the post exilic prophets, most likely Zechariah. The prophet Zechariah is up there with Daniel in terms of its influence in the book of Revelation. Prophets Ezekiel, Daniel and Zechariah loom large in John's mind when he composed Revelation. Isaiah slightly less so and the Psalms as well. John has alluded to about 30 of the 39 OT books in Revelation.  If one wants to major or know Revelation in any way, there is no short cut but to learn the Scriptures, the Christians Old Testament especially the prophets.
at September 12, 2016