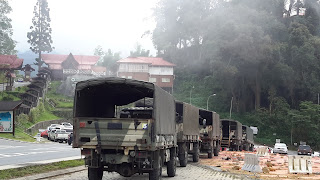 When I received news that the first fatalities were a Malaysian guide and a Singaporean girl, I am saddened that the Ranau earthquake had caused the loss of lives. Yet in my heart, whatever had happened, is happening or will happen, the fates of Malaysia and Singapore are bound together, not just because of its near vicinity but its shared history how together with Sarawak, Sabah and Singapore joined Malaya to form the Federation of Malaysia on 16th Sept 1963 which happens to fall on the birthday of the late Mr Lee Kuan Yew, the founding Prime Minister of Singapore. Though after almost 50 years of separation, Singapore had forged ahead economically and sought to build a distinctive Singaporean identity beyond its former days (though I don't quite understand the theme of SEA Games opening act last night??), Singapore and Malaysia remain the closest neighbours linked to the State of Johore by the Causeways in Woodlands and Tuas. I have no doubt that through this natural disaster in Sabah, these ties will be strengthened especially between Sabah and Singapore. I have only praise for the local mountain guides who brought down the injured and the dead. If caught in a bind or disaster, Sabahans are always ready to help and they will go all out to extend hospitality beyond the call of duty. Many of those in charge of Sabah Parks are Christians and we pray for wisdom and courage so that they can search and rescue those who are still stranded along the trails of Mount Kinabalu (photo: at the entrance of Mount Kinabalu at 9am today)
As usual, there are many false reports. The roads are good. I drove from KK to Ranau early this morning and there was no sign of road damage except a few small cracks in a couple of places. One would not know an earthquake of 5.9 magnitude had occurred only yesterday. Life, it seems, has returned to normal. The Saturday market is still full of people. 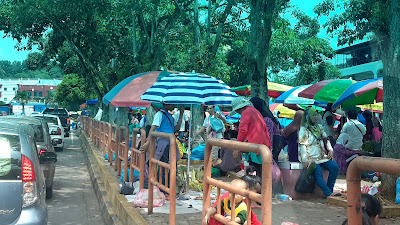 True, a couple of aftershocks frayed the nerves of many last night. I received calls from church members for prayers and I stayed up until almost 1am and prayed constantly. I was sitting in my house in KK when the 7.15am earthquake happened 16 kms from Ranau. I was reading Jeremiah 15-17 and suddenly I felt the house swayed from right to left. I thought I was in a trance for a second since I was meditating on God's Word but soon I heard the shouts and commotion down my backward when many people rushed down from their apartments.

As I write more pictures are coming about a few people crushed by rocks and airlifted from the place of incident. Horrific. 10 years ago, I wrote in the preface of my book on Revelation, "Revelation speaks much of earthquakes..." and the end of time is dawning on us. The Day is nearer than we thought...Sabah used to be safe; never had such a strong 5.9 Richter earthquake happened egeneto. When I drove along Mount Kinabalu for an hour or so, I look at the Mountain that shook Sabah. Malaysians and Singaporeans mourned together for family members who perished and Sabah is never going to be the same again.
at June 06, 2015