6 Days after the Earthquake 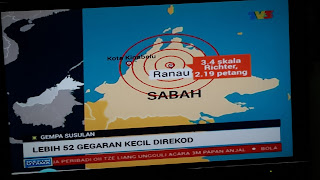 It's 6 days after the earthquake. The earthquake in Ranau coincided with the start of the 6-day war in 1967 when by 10th June 1967, Jerusalem was reunited under Israeli control with the Temple Mount regained for the Jews. These 6 days will never be forgotten. The Lord knows how to save the righteous from calamity. I was supposed to be right in the epicentre of the quake on 5th June but the night before I had decided to go down to Kota Kinabalu as I wanted my wife to attend the final night's service of our Women's conference. But Friday was chaos in Ranau but I did  not return until early Saturday morning. I said to myself if only one church member called me for help or prayers before nightfall I will go back to Ranau the same day. One caring elder did call at 7.45am to make sure I was alright. But I received two calls for prayers one at 9.30pm and another at 11.30pm both times because there were strong aftershocks after the 5.9 magnitude earthquake which struck at 7.15am. As I had to preach on Saturday night and Sunday morning I was busy preparing for my 2 messages in KK while trying to keep abreast of news of the Ranau earthquake.
When I arrived in Ranau just after 9am, it was business as usual and I went straight to the workplace of the church member who called me to make sure she was alright. Then I returned home to find only empty bottles had fallen on the sinks and kitchen table and none fell to the floor. In my office only empty boxes I put on top of my shelves fell down. I bowed and worshipped the Lord as many dwellings and businesses experienced damage and cracks in their buildings.

Saturday afternoon I attended the worship rehearsal before driving 30 minutes to speak at a night's service at SIB Wang near Mount Kinabalu, the epicentre of the quake. All anxieties and fears were lifted as we worshipped the Lord and the energy and enthusiasm of the 200 youths did rub off on me and I felt as alive as ever in the Spirit.

Sunday I preached first up and performed a prophetic act of taking a bag and putting it on my shoulders and carrying it in the sight of the congregation like prophet Ezekiel. I took out one by one, items necessary to survive post-quake for a few days. I reminded my church what I preached the Sunday before that Jesus' home base for ministry, Capernaum was cursed despite Jesus spending 2 or 3 years there. Don't presume just because of the presence of God's servant in the city, the city will be spared from disaster and God's judgment. On the contrary, the city's dwellers will judged according to their response to the preaching of God's servants in their midst. I cited how the city which rejected the two witnesses in Revelation 11 was struck by earthquake.

On Monday I called for a special 2-hour prayer as we kept the Day of mourning declared in Sabah and Singapore's Day of remembrance for the loss of lives in the earthquake.

On Tuesday I finished grading all 44 papers, two assignments each for 22 students of my OT 1 class.

Yesterday I chaired the pastors' fellowship of Ranau district and 13 pastors turned up, some with their spouses and families. We have 10 male and 8 female pastors in SIB Ranau district. Through the meeting I realized for a moment why I was sent to Ranau. I did not think I would be elected chairman as I am new in the District but my fellow pastors put their hope in me to lead and guide them in the Lord. There were suggestions of starting Greek classes for the pastors and we decided to donate RM500.00 to the family of one of the deceased mountain guides. I even suggested that we should plan a visit to Singapore next year to build bridges with Singaporean churches and strengthen brotherly and sisterly relationships in the Lord which this earthquake had somewhat brought Singapore and Sabah together in mourning but also I believe, in rejoicing in doing the work of the Lord in these last days. These ta tauta have been my past 6 days.
at June 11, 2015