Longest Day: Persisting in Ministry when the Going gets Tough 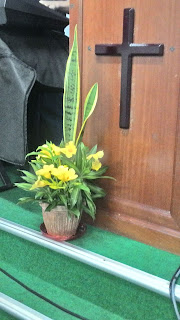 I had one of the longest days. Not only I was struggling with a bad cold whole night until I almost gave up hope of preaching. Today's Father's Day and I preached 2 sessions consecutively. Last night I only spent 30 mins with my worship team as my running nose worsened. The weather change in Ranau is drastic. On Saturday morning I had to put on two pieces of extra clothing. It was that cold. It's rainy season again and that made mudslides and landslides worse. But the worst seems to be over. We had running water on Friday and I remembered shouting on top of my voice while driving back to Ranau and asked the Lord to heal the waters of Ranau as He did in the days of Elisa for the waters of Jericho (2 Kings 2). How great is our God for instead of 3 weeks without water we only had to suffer for 4 days.

I challenged the church to be salt and light of the earth. I preached from Matt 5,13-15 in the first session. As some hostels had run dry, most students had been directed to return to their villages. I preached about shining our light before men so that they may see our good deeds and glorify our God in heaven. I chastised the church for being slow in reacting and related how on Friday we were visited by a Buddhist organization in my church office. How quickly they responded to help those in need yet those who claim to know the true light did not do much but wait for help and handouts instead. I castigated the congregation for lack of love in the 2nd session as I preached from 1 John 3,11-18. When crises struck how often only self interest takes over and overwhelms us until we don't know or care about the needy among us. I told them even Jesus had asked for water from the Samaritan woman and asked whether they have helped anyone in the past days. What about fellow church members? After church service I offered to send water to a church member's who is without transport. Let us love not in words but in deeds and in truth, says John. 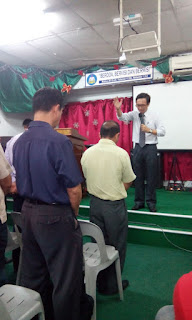 We had a Father's day do after the service ended which was nicely done by the women's folks. We had a good time sharing lunch with members and all went home contented despite the strong messages over the 2 services.

I rushed home as I called an emergency meeting for the church council. We increased 10-fold our budget for charitable causes including dealing with contingencies like earthquakes and water running dry. I managed to get my leaders to agree to relook building plans to make sure that they are earthquake proof if there is such a thing. We wanted to do it right this time and not wait for another disaster to strike before sitting up. At 3.30pm we ended and despite an irritating nose and a slight sore throat I had managed to accomplish all I wanted in the strength of the Lord.
at June 21, 2015