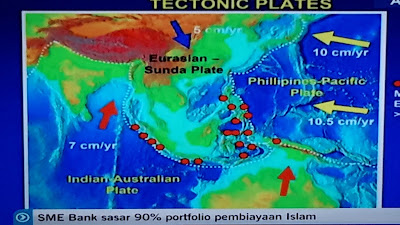 As I reflect on the past couple of weeks post-quake, I realized that the Lord is a refuge for the righteous and He answered prayers with his awesome power to bring glory to his name. Some of my friends thought I was caught in the midst of the quake when it hit on 5th June and then a strong aftershock of 5.1 on 13th June morning. Both times I was away and good intentions and going on a mission probably saved me from experiencing these fearful tremors. On the night before the first quake I left Ranau for KK to attend the final night meeting of our Women's Conference. I wanted to meet with my good friend, the preacher for the night but his sermon was so long that ended at 10.30pm that I left soon after the closing prayer without meeting him.
One lesson learned. Never preach an hour 10 min sermon on the final night of a conference. I will tell him when I see him next. Second, I was away in Malinsou, deep into the interior of Borneo when the 5.1 tremor struck. I felt the floor moved as I slept on the floor with a mattress. It was one of my toughest nights, being kept awake whole night because of mosquitos and not because of the shaking of the earth.

Third, I realized the church must act fast in emergencies, meeting the needs of the victims especially fellow Christians who suffered from the quake or aftermath of the quake like landslides and water shortage. It took me 16 days after the quake to call my first meeting. If only they knew what the Lord was doing in our midst in these past days. Not that I needed a committee or stuff like that. I acted shiftly and called an emergency prayer meet on the day of mourning on 8th June which coincided with Singapore's Day of Remembrance for 10 of her citizens killed on Mount Kinabalu. We had breakthrough that day in our spirit that the Lord had heard our prayers. We didn't need a crowd but where 2 or 3 are gathered in my name,  I am there in their midst.

I managed to persuade my fellow Ranau pastors to give a small token to a family that lost a son who was a mountain guide. We did that on 14th June, on a Sunday afternoon. How the family was blessed by that little good deed though they might have received donations elsewhere.

As usual they are those who are slow to the chase but only now began to call for prayer meetings and the like but the urgency is gone and the storms have passed. When there was no water last Monday I wonder how many people prayed to the Lord. GOD reminded me that Elisha healed the waters of Jericho and by hearing the word of Christ my faith was quickened and I cried aloud to the Lord and he heard my cries from his holy mountain (I happened to drive past Mount Kinabalu on Thursday when I said that prayer on top of my voice and I spoke in unknown tongues). It was over in less than 10 seconds, my prayer that is, just as the earth shook for 10 or 15 seconds on 5th June, the Lord shakes the mountains and they skip like rams at the sight and voice of the Lord.
at June 22, 2015