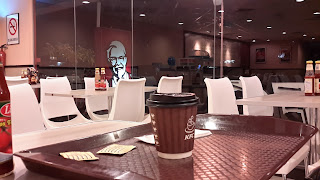 I must be on a roll. It's been a golden week. I have preached four times since Tuesday and twice more on Sunday making it a total of 6 sermons in 6 days. If one counts by sermon I am working thrice as hard as I was in my previous pastorate because at most I preached twice a week and on alternate Sundays. No wonder I quickly cut any chance of joining a couple of large churches in Singapore when they promised that I could preach once a month. In a way I am still looking out for a senior pastor's position if only I could determine I preach no less than alternate Sundays. There are times I had to preach without notes.
Having read several commentaries on every book of the Bible helps. God's word is already in my heart and mind. It is a matter of waiting on the Lord to determine how best to present the message according to the immediate context and needs of the congregation.  After 6 months with the church I got to know most leaders fairly well. I am comforted that like David who as king never had his own way all the times. He had a few tough generals to contend with and within his own family, sons who turned out rebellious and treacherous.

Last night I preached in total darkness. Not only we had to contend with water shortage but electricity supply was intermittent at times. I am glad my Bible now is often the tablet version and light shines on God's word as I preached for 20 minutes on Isaiah 58,1, 5-8. I spoke about five things the church must be doing. First, by breaking bondage of humiliation like paying low wages to workers who deserved more. I told the church that we should pay above the minimum wage of RM900.00 per month even to aliens and foreigners. Second, to break bread with the hungry and how the early church fed its members at least one decent meal each day out of the generosity of its richer members. Third, to welcome to our homes the homeless and show hospitality. Fourth, to cloth the naked and I shared how I lent my winter jacket to a pastor visiting Israel late November last year without expecting it to be returned. And I gave him my best jacket the one I bought for my trip to Perth in 2013. Fifth, not to ignore our own flesh and blood, our kinsmen and relatives. I shared how my brothers often disagreed with me, especially when I spoke of Jesus Christ.  How one by one exited a group when one asked for my opinion on the recent earthquake. How hard it is for the rich to be saved.  Unless the Father draws one to Jesus no one can come to Christ. To the world, Christianity is folly for the Cross is folly to the wise but God in his wisdom chose the cross to be the instrument of salvation.
at June 27, 2015