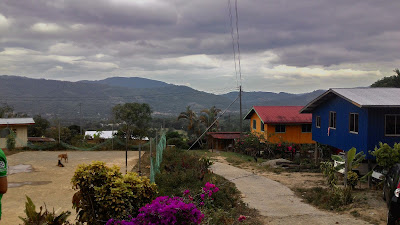 I suppose when you are open to what comes to you, you learn new things and savour new experiences. This afternoon before 4pm I headed to a nearby village up a steep hill with some amazing scenery. My wife, an elder and two others came with me in my pick up. We were given the honour of leading the service, a combined service of two main denominations in the village. There was a large turnout with almost 40 families turning up with their children. Initially it was not easy to preach without a rostrum and with kids running around in the hall but within minutes I managed to focus on preaching and I preached an evangelistic sermon on being born again and drinking the water of life given by Jesus. I summarised the two conversations of Jesus with Nicodemus and the Samaritan woman in John 3 and 4 and the unifying theme being water and Spirit in both chapters. I started by relating how water is a most basic necessity for life but yet when it is available it is taken for granted and rarely appreciated. But now we are facing our 2nd water crisis in a fortnight.
With heavy rains, the reservoir suffered from mud flows from mount Kinabalu and there was no running water.  I talked about unbelief as I noted Jesus' words that "you will not believe..." even earthly things how can you believe if I tell you heavenly things? The water metaphor in John 3 and 4 needs much unpacking but praise God I managed to speak in simple language, I hope because most of those present in the audience were village folks. I never think that they may not understand spiritual truth because of their lack of worldly education. Nicodemus, the religious scholar and noted teacher could not understand Jesus's teaching on new birth while the unnamed Samaritan woman likely to be lowly or without education worldly or theological, came to understand Jesus' offer of the water of life. No wonder the Gospels speak of the common folks listening enthusiastically to Jesus. I was touched by the village's hospitality and some of my church members from the village were especially kind making sure their pastor was served the best foods with all kinds of delicacies and dessert.