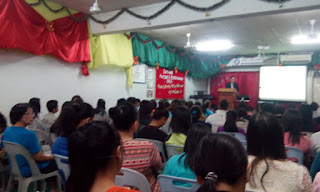 Despite being the weekend when most secondary school students return to their villages, the turnout for the seminar was better than expected. Unfortunately with the water shortage especially in affected schools, it was difficult to plan an event when we are not sure the students would be asked to return to their villages as it was the case today. Nonetheless, a total of 95 people registered and the seminar started at 9.10am in the morning. The only hiccup was lunch being 30 minutes late, with the women's folks cooking for 100 people and only 4 or 5 women were doing everything they could in the church kitchen before the packets of lunches were sent to the church. I wonder whether it was worth the effort to save a couple of hundred ringgit. It was a lot of work cooking for 100 people, though the food was certainly delicious with soup and fruits beside.
The 2nd session was based on 1 Chronicles 25 about the three families of musicians and singers led by Asaph, Heman and Yeduthun. I spoke about prophesying with the harps or musical instruments. I spoke about how songs can lead to a climax when we are ushered into the presence of the Lord and behold His beauty and power. I probably discuss 20 or more things to look out for as a song leader in 55 minutes. It ended with a 15 minute Q & A session. The third session was on forming a church choir led by an expert in the field, one of the few SIB pastors trained in music and voice. We even had a short workshop and practice. It reminded me of how all my former students at TTC had to go through voice training and take part in the College choir. It was an endurance test for some.

The last session of the seminar focused on the singing new songs and writing spiritual songs. I sang two of my songs in English and one the elders' wife also sang two of her songs. Then several people came forward and sang their songs and it was most lively of sessions, seeing the musical talents of those called to compose and sing spiritual songs. We ended at 3.30pm sharp and the whole organizing committee gathered around me and we celebrated before the Lord and went home contented and full of joy.