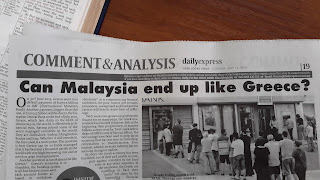 I don't think in my 51 years I have seen the politics and economy of the country facing such immense national travails as in the past couple of months.  In my blogpost last December, I wrote as follows: "come 2nd half of 2015 Malaysia will see its economy facing its greatest challenge..." Is this prophetic or just shrewd observation of a concerned citizen that follows the ups and downs of a country he loves? I also warned my fellow Malaysian Christians in the Men's Conference last April that Malaysia's economy would go into troubled waters towards the end of the year and things will only get worse in 2016.
The Fitch ratings' upgrade on state of the Malaysian economy on 1st July (Malaysian time) was a false dawn as in less than 48 hours all the good vibes were gone with the expose of Wall Street Journal of an alleged amount of US$700 million from several GL companies into the PM's personal accounts. The Ringgit fell to its lowest following this latest political upheaval and Sing dollar rose to at all time high of 2.82 Ringgit to the dollar (now it is back to 2.80). No wonder Malaysia could boast (phyrric victory) of increased tourist numbers when Singaporeans flock to Johore and Malacca for shopping and recreation on the wave of their strong currency. I envy the 100,000 Malaysians who cross the causeway to work in Singapore and it makes it worthwhile for them to make the dawn journey to the Republic and back to Malaysia at night with a hearty smile on their faces with Sing dollars lining their pockets. For those earning Ringgit in the lower or even middle income group it is more travail to bear. My fellow pastors have been discussing in a number of whatsapp groups how to cope with the rise in cost of living made worse by GST and Ringgit's depreciation down the abyss. Most of our pastors earn below national poverty level income. If it falls to 3.9 or 4.0 to the USD I have to seriously consider returning to Singapore. From the February 2013 Lahad Datu's incursion that saw my home state bombed by Malaysian jets to the recent earthquake in Ranau, Malaysia as a whole and Sabah in particular have seen its fair share of travails and tribulations. When the righteous rule the land, the people rejoice but when wickedness reigns, the land mourns. Lord, how long, Lord? How long do You see injustice and keep silence? Why do the righteous suffer and you let it be? Act, Lord for your people's sake!
at July 16, 2015