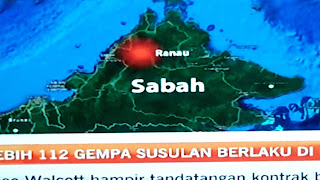 My birthday celebrations ended with a bang. Exactly 10 minutes into my 51st year, a tremor hit Ranau with the force of 4.7 Richter scale. It jolted me from my sleep made sweet by the events of the day or the previous night. I rushed back to Ranau from Kudat, a trip of some 3 hours to attend the Women's Fellowship night at church. When I arrived at the church at 8pm already 30 minutes late the church was filled with 100 people and I knew something was on. I quickly apologized for being late at the start of my 15min sermon, saying that it is not right for the sheep to wait for the shepherd but for the shepherd to wait for the sheep. I think the congregation forgave me in no time seeing that I am usually the first to arrive in church for any activity or service. I preached from Mark 3:21 to the end of the chapter about Jesus' family and his conflict with the experts of the law.
I made three points. First, a house divided cannot stand and I sounded out the dangers of disunity, conflict and self ambitions in dealing with one another.  The metaphor of a house is taken to mean two things; first, an actual household where husband-wife and children must stay united if the family is to be strong. Second, a house can refer to the house of God, the church and how the church must be united in heart and purpose, doing God's will. How love should be practised at all times with hearts filled with compassion. The second point I made was Jesus' retort to the accusation that he cast out demons by Beelzebub. Jesus recorded one of his harshest statements in the Gospels by saying that all sins could be forgiven but not blasphemy against the Holy Spirit. Often times, I myself had this accusation laid against me of improper motives or motivations or that the source of my ministry is human intelligence or secular wisdom and how enemies tried to mock, not recognizing the power of the Holy Spirit in an anointed ministry of God's Word. When my sermon was over, the lights went out and out came a cake lit by 5 candles carried by my wife with the entourage of women in her train. And they sang Happy Birthday and I was in shock and not a little embarrassed. I never had a birthday celebrated in church by a congregation and I just did not know what to make of it. I was not emotional at all but the youths' presentation through a video recording moved me a little with the background music and song of one of my favourite songs gadol elohai Great is our God in Hebrew and English. The video had several youths in persons and in groups saying a few words. But the climax of it was a shot at the end of the first service yesterday when the whole congregation waved with their well wishes.

I had taken a few knocks of late and perhaps the women's folks, more sensitive than the men knew their pastor needed some encouragement and I was embarrassed not least as it was overly done. I realized that as pastor you can't please everyone, and not everyone is pleased with you. But if the majority of the congregation is happy with the pastor as is apparent from the birthday bash they gave, then any pastor should be contented. The third point of my sermon was about Jesus' family seeking him and thinking that he was demented. But to their anxiety, Jesus' reply became a key text to my life and ministry. Who is my brother, my sister and my mother? Those who do the will of God...My whole family, parents and brothers happened to be in KK and they had asked me to come down for the weekend. But indeed I had come home to Ranau, to my church for there is no place like home. My son from Dunedin texted me early this morning, "Dad, are you staying on in Ranau with all the earthquakes?" I replied, "Yes, son". At least until the Lord leads me on to another home where His Spirit dwells among His people.
at July 27, 2015