From Sunday to Sunday 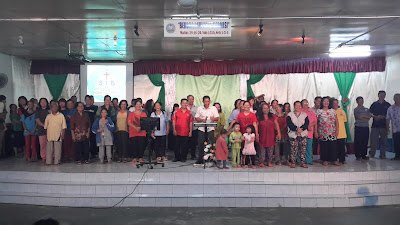 I was yawning all the way feeling not a little anxious when all the preliminaries be done with and I would get up the pulpit to preach. It was about 9.30pm when the call came and I duly preached a 30 min sermon. It was my 7th sermon in 8 days and praise be to God for it could only be the power of the Holy Spirit that I could still preach after a day which started at 5.30am with no rest the whole day. By the time I reached the church at 7.15 am there were already 50 students gathered at the stairs and by 7.45am the church was filled up. For a second week running all seats were taken and there was no room to move except the small stage which we put 5 chairs last Sunday.  There must be at least 250 people crowded into a 1,000 Sq ft. Space.  I thought there would be less people in the 2nd service as I took out two rows of chairs in front so that I did not have to sit right at the edge of the stage and strained my neck to look up the screen in front. But lo and behold by 10.20 am,  most seats were taken up and we had to put a row of chairs in front and I moved up accordingly. I preached a fairly lengthy message of 45 mins on the theme 100 days after the earthquake and it so happened that last evening was the start of the Jewish new year Rosh Hashana, the first day of Tishri, the 7th month.
I showed on screen the Hebrew months and taught the congregation briefly about the Jewish calendar and the feasts and what fulfilment in Jesus meant, not that the law was done away with but that it had reached its goal. That means these feasts are still important pointers, moed the appointed times as Scripture says. I shared how since the earthquake I had been doubly busy and instead of preaching 2 or 3 times, it has been 5 to 7 times a week. I preached on Monday, Tuesday, Wednesday,  Friday, and twice on Sunday. Last night was especially special as it was a gathering of 26 pastors from 4 districts, in fact we have 76 pastors in 6 districts that make up the larger Ranau district. The local church in Muruk, about 20 mins drive hosted us and most of the members came and joined us in worship. At least 150 people were in attendance and it was good turn out on a Sunday night as it is normally a time for rest after a hectic Sunday morning that could last until late afternoon in some churches if they have meals fellowship over lunch and other church activities.

I rested most of today but we are experiencing blackout all too often and my usual Monday afternoon nap time did not eventualize. With fatigue deflating my spirits but the sense of quiet joy and thanksgiving rose from my heart to the Lord.  It was important last night that I preached well since for most of my fellow pastors it was the first time they heard me preach for a long time since my time in Singapore and pastorate in Kota Kinabalu when I stayed put in KK and did not travel much except twice or thrice over 5 years and 3 months.
at September 14, 2015