It was a bleak National Day. It is difficult to feel joyful with so many unresolved political issues and the economy is facing a downturn with the free fall of the Ringgit. National leaders cannot expect blind loyalty from its citizens unless they gain respect by serving the public good. They need to be credible in the eyes of its rakyat and they can't presume on support if they fail to live up to their pledges of integrity and goodwill. I had a Merdeka meeting with University students from my church with two sixth formers turning up as well. I need to encourage this young generation per chance they could also influence the church for good and through the church society at large.
I took Daniel as my role model yet again, being a wiseman or advisor to several kings and potentates in his long service in the Babylonian and Persian kingdoms. Church members show love by offering their first fruits to their pastor (as priest in the house of the Lord). For the past week, I had durians, rambutans, darap, langsats, Thai longans, and many more local fruits. 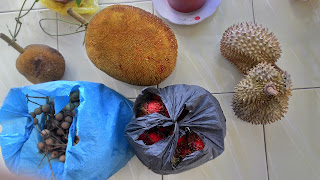 Significantly, I have survived 8 months in this present ministry with two-thirds of the year gone. Another 3 months from now will bring us to December by which time I will have to make a decision what to do for 2016. The first day of September also brings some relief in terms of exciting political happenings in Singapore. It is Nomination Day. In 2011, I watched many speeches live on Nomination Day with Nicole Seah's 4 minute speech being the highlight. It is good for her to take time out to establish herself in her career for when the Election comes round next time, she will still be in her early 30s but with a decade long working experience behind her. Rumours that Nicole could be joining WP is also good news, if only to provide WP a chance of grabbing more seats in the next GE in 2019 or 2020.
at September 01, 2015