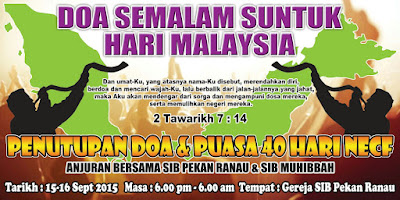 I can't imagine at the start of my pastorate that I would be preaching as much as I am doing now. Ironically, I have sole charge of the pulpit ministry in church. It has been my principle not to preach more than twice a week but more often than not, this plan does not seem to work. So I am adapting to my preaching cycle of rest and preach. Yesterday I got up at 5am after an overnight trip in KK to head back to Ranau by 8.30am. I had a full day of work including planning for a whole night prayer on Malaysia Day, 15th to 16th September.
By 4pm I went up to my apartment to rest but my mind would not rest as I reflected on the message I was going to preach in cell group later in the night. I preached for 35 minutes slightly longer than usual cell group sermon of about 25 minutes. That took a lot from me and this morning I was feeling lethargic and jaded. I looked enviously at the MATTA fair deals and wished I could travel to somewhere far to escape the heat of battle. But fighting a war requires persistence and perseverance and if one gives way just when victory is nigh, then all the past 8 months of efforts would go to waste. So I guess the earliest time I could take a break is probably late October or early November. I will go for a 2 weeks leave at least but if I don't travel it means I will be at home in KK. Perhaps time to finish off the last chapter of my book, "Memoirs of a Modern Missionary." Time also to reflect on 10 months of ministry and pray for God's future direction come end of the year. But I am resting now, taking it easy on a Saturday morning as by afternoon, I hope my energy levels will rise to prepare for tomorrow's Sunday sermon.
at September 05, 2015